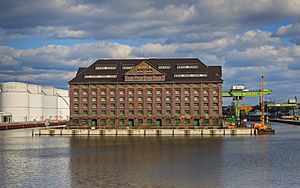 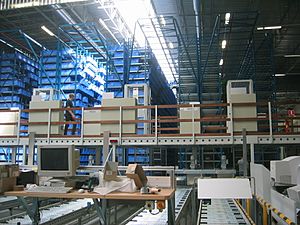 The inside of a warehouse

A warehouse is a commercial building for storage of goods. Warehouses are used by manufacturers, importers, exporters, wholesalers, transport businesses, customs, etc. They are usually large plain buildings in industrial areas of cities and towns. They have loading docks to load and unload trucks; or sometimes are loaded directly from railways, airports, or seaports. They also often have cranes and forklifts for moving goods, which are usually placed on ISO standard pallets loaded into pallet racks.

All content from Kiddle encyclopedia articles (including the article images and facts) can be freely used under Attribution-ShareAlike license, unless stated otherwise. Cite this article:
Warehouse Facts for Kids. Kiddle Encyclopedia.