Pink Floyd were an English rock band that became famous in the 1960s and 1970s. They performed for more than 30 years, and have sold more than 200 million (200,000,000) albums. They are famous for their live shows and deep music. Most of their albums are concept albums, which means every song is linked through a theme. Their first album was the Piper at the Gates of Dawn, which was released in 1967. Their latest album is The Endless River, which was released in November 2014.. The band were named after the blues artists Pink Anderson and Floyd Council by Syd Barrett, one of the band's founding members. In 2005, they played at a concert called Live 8 after 24 years of not playing together. The line up was David Gilmour, Roger Waters, Nick Mason and Richard Wright. They have made some very popular albums including The Dark Side of the Moon and The Wall. After Richard Wright died in 2008, David Gilmour has said that he does not want to reunite, despite Roger saying he might want to. It is now believed that David Gilmour and Roger Waters are friends after becoming enemies for a long time.

During most of their career, they played a kind of rock music that some people call progressive rock.

The original members of Pink Floyd met in an architectural college. The band started as a blues band. Later, under Syd Barrett's leadership, they played music that was psychedelic in style. After Barrett left the band, they started to play longer and more complicated songs, and to play at a lot of colleges and universities. Soon, they were famous as studio musicians who loved to experiment with music. On the album Atom Heart Mother, from 1970, they used a brass band and a choir.

They used a lot of things to make their concerts interesting to watch. They had a round movie screen on the stage. They would show videos on the screen when they played. They also used lighting and lasers in a much fancier way than many bands do. They also had big balloon puppets. The most famous is in the shape of a pig, which first appeared on the cover for their album, Animals. The pig has since become a symbol of Pink Floyd. Another symbol that reminds people of Pink Floyd is a prism with light shining through it. This was on the cover of Dark Side of the Moon, one of their most popular albums. The album was released in 1973, and stayed on music charts for a very long time. Millions of people bought it.

The album The Wall, recorded in 1979, was also famous. It was made into a movie, directed by Alan Parker, in 1982. That album is important to the history of the group. It talks about the distance they put between them and their fans. It was the last album they all worked on together before starting to split up.

Roger Waters forced Richard Wright to leave the band in 1979, but Wright came back in 1987, after Waters quit. Waters tried to sue the other members so that they could not call themselves Pink Floyd without him, but he did not succeed. Because of this and other reasons, there was a lot of anger and bitterness between Waters and the other members of the band, especially Gilmour.

The last album of new songs that Pink Floyd released is called The Division Bell. It was made in 1994, when Pink Floyd also played their last concert tour. The very last time that Pink Floyd played was in 2005, as part of the Live 8 concerts for charity. Waters sang with the band for the first time since leaving the band. It was a big surprise to many people who thought Pink Floyd would never play together again, especially not with Roger Waters.

In 2014, Pink Floyd released their first album in over 20 years: The Endless River. 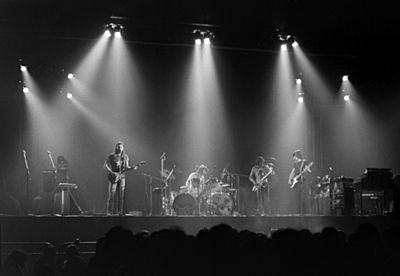 All content from Kiddle encyclopedia articles (including the article images and facts) can be freely used under Attribution-ShareAlike license, unless stated otherwise. Cite this article:
Pink Floyd Facts for Kids. Kiddle Encyclopedia.