University of Leeds facts for kids

The University of Leeds (sometimes called Leeds University) is a university in Leeds, West Yorkshire, UK. It first started in 1831 with the opening of a school to teach medicine which was one of the first outside of London, Oxford, and Cambridge. 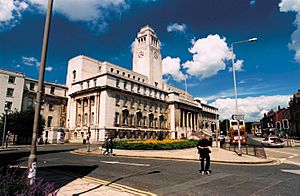 Today one of the UK's leading universities. It is a member of the Russell Group. The university is one of two in the city, the other being Leeds Metropolitan University. The main campus is in the Woodhouse area of Leeds, close to Leeds City Centre.

The main campus is situated in the Woodhouse area of Leeds, which is about half a mile from the city centre. The campus has many older Victorial buildings such as the Great Hall, as well as some mid-twentieth century buildings such as the Parkinson Building. There are also many brutalist building on campus sich as the Roger Stevens Building and the Edward Boyle Library. In recent years newer buildings have been added such as the Marjorie and Arnold Ziff Building.

All content from Kiddle encyclopedia articles (including the article images and facts) can be freely used under Attribution-ShareAlike license, unless stated otherwise. Cite this article:
University of Leeds Facts for Kids. Kiddle Encyclopedia.