Edward VII (9 November 1841 – 6 May 1910) was the King of the United Kingdom from 1901 to 1910, which is called the Edwardian period. He was the only British ruler whose royal house was called the House of Saxe-Coburg and Gotha. The name was changed to Windsor by his son, George V of the United Kingdom in 1917 and is still used today. Edward was born Albert Edward and was the oldest son of Queen Victoria and her husband, Prince Albert. He was Prince of Wales and heir to the throne for longer than any other person. His mother reigned for 63 years and Edward was 59 years old when he became King. In his younger years as Prince of Wales, he popularized many trends in fashion. He was married to Alexandra of Denmark. Edward only ruled as King for nine years but made a lasting impression. He became increasingly popular with his people and minister and was credited as the 'peacemaker' for his work in mantaining world stability at a time when War seemed to be looming. He died at the age of 68 in 1910. Four years later the peace he worked so hard to keep was broken with the declaration of the First World War (1914-1918).

Edward VII was the father of King George V and grandfather of King Edward VIII and King George VI. He is also the great grandfather of the present Queen, Elizabeth II. There are a number of statues of Edward VII around the British isles and Commonwealth Realms. He was given a grand state funeral which the largest gathering of royalty taken place anywhere in the 20th Century. It included the likes of Kasier Wilheim II (who would later be at war with Britain in 1914) and Tsar Nicholas II as well as many others. For the first time in Royal history, Edward lay in state for the people to pay their last respect. A true reflection on his immense popularity. 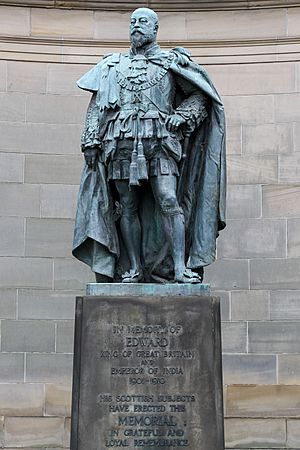 Statue of Edward VII at Holyrood Palace in Edinburgh

All content from Kiddle encyclopedia articles (including the article images and facts) can be freely used under Attribution-ShareAlike license, unless stated otherwise. Cite this article:
Edward VII Facts for Kids. Kiddle Encyclopedia.