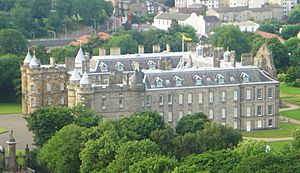 Holyrood is an anglicisation of the Scots Haly Ruid (Holy Cross).

Pope Benedict XVI visited Queen Elizabeth II on 16th September 2010 on his first day of his Official Papal visit to the United Kingdom. He then went on to say mass at Glasgow's Beallahouston Park.

All content from Kiddle encyclopedia articles (including the article images and facts) can be freely used under Attribution-ShareAlike license, unless stated otherwise. Cite this article:
Holyrood Palace Facts for Kids. Kiddle Encyclopedia.