The son of King James IV of Scotland, he was born in April 10, 11 or 15, 1512, at Linlithgow Palace, West Lothian, and was still an infant when his father was killed at the Battle of Flodden Field on September 9, 1513. 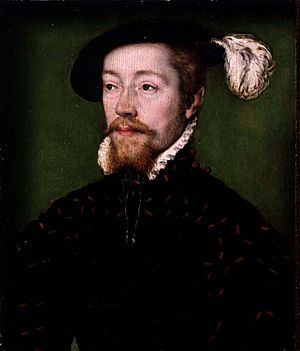 He was crowned in the Chapel Royal at Stirling Castle on September 21 1513. During his childhood, the country was ruled by regents, first by his mother, Margaret Tudor (sister of King Henry VIII of England), until she remarried in the following year, and thereafter by John, Duke of Albany, who was himself next in line for the throne after James and his younger brother. In 1525 Archibald Douglas, 6th Earl of Angus, the young king's stepfather, took custody of James and held him as a virtual prisoner for three years, exercising power on his behalf. James finally escaped in 1528 and assumed the reins of government himself.

His first action as king was to remove Angus from the scene, and he then subdued the Border rebels and the chiefs of the Western Isles. James V increased his royal income by tightening control over the royal estates and from the profits of justice, customs and feudal rights. James spent a large amount of his wealth on building work at Stirling, Falkland, Linlithgow and Holyrood.

James renewed the Auld Alliance with France, and on January 1, 1537, he married Madeleine de Valois, the daughter of King Francis I of France. Following her death a few months later, he proceeded to marry Marie of Guise, the daughter of Claude, 1st Duke of Guise. 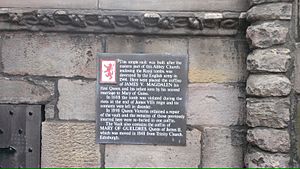 Burial Site of James V, Mary of Guelders and other Royals at Holyrood Abbey

The death of his mother in 1541 removed any incentive for keeping peace with England, and James' army was defeated at the Battle of Solway Moss in 1542. The setback affected his health, which had been poor for some time, and he was on his deathbed at Falkland Palace on December 8 when his only living heir, a girl, was born.

James was succeeded by his infant daughter, Mary, Queen of Scots. He was buried at Holyrood Abbey alongside Madeleine and his sons by Marie de Guise.

All content from Kiddle encyclopedia articles (including the article images and facts) can be freely used under Attribution-ShareAlike license, unless stated otherwise. Cite this article:
James V of Scotland Facts for Kids. Kiddle Encyclopedia.