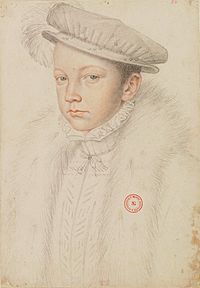 Francis was born in Fontainebleau, France, on January 19, 1544 . His parents were Henry II of France and Catherine of Medici.

Francis died in Orleans, France, on December 5, 1560 because of an ear infection. He is buried in the Saint Denis Basilica, next to King Charles IX of France.

All content from Kiddle encyclopedia articles (including the article images and facts) can be freely used under Attribution-ShareAlike license, unless stated otherwise. Cite this article:
Francis II of France Facts for Kids. Kiddle Encyclopedia.