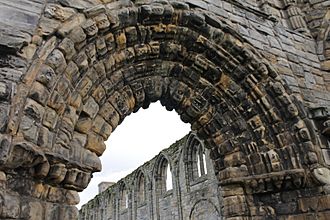 The Cathedral of St Andrew (often referred to as St Andrews Cathedral) is a ruined cathedral in St Andrews, Fife, Scotland. It was built in 1158 and became the centre of the Medieval Catholic Church in Scotland as the seat of the Archdiocese of St Andrews and the Bishops and Archbishops of St Andrews. It fell into disuse and ruin after Catholic mass was outlawed during the 16th-century Scottish Reformation. It is currently a monument in the custody of Historic Environment Scotland. The ruins indicate that the building was approximately 119 m (390 ft) long, and is the largest church to have been built in Scotland. 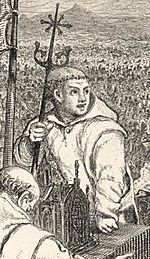 William de Lamberton, Bishop of St Andrews who rebuilt and dedicated the cathedral in 1318

The cathedral was founded to supply more accommodation than the older church of St. Regulus (St. Rule) afforded. This older church, located on what became the cathedral grounds, had been built in the Romanesque style. Today, there remains the square tower, 33 metres (108 feet) high, and the quire, of very diminutive proportions. On a plan of the town from about 1531, a chancel appears, and seals affixed to the city and college charters bear representations of other buildings attached. To the east is an even older religious site, the Church of St Mary on the Rock, the Culdee house that became a Collegiate Church.

Work began on the new cathedral in 1158 and continued for over a century. The west end was blown down in a storm and rebuilt between 1272 and 1279. The cathedral was finally completed in 1318 and featured a central tower and six turrets; of these remain two at the east and one of the two at the western extremity, rising to a height of 30 metres (100 feet). On the 5th of July it was consecrated in the presence of King Robert I, who, according to legend, rode up the aisle on his horse.

A fire partly destroyed the building in 1378; restoration and further embellishment were completed in 1440.

The cathedral was served by a community of Augustinian Canons, the St Andrews Cathedral Priory, which were successors to the Culdees of the Celtic church.

Greyfriar (Franciscan) and Blackfriar (Dominican) friars had properties in the town by the late 15th century and possibly as late as 1518. 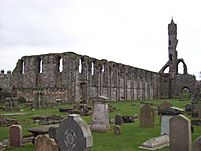 The ruins of the nave of St. Andrews Cathedral 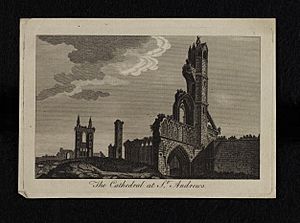 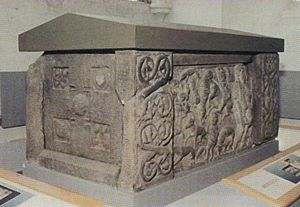 In June 1559 during the Reformation, a Protestant mob incited by the preaching of John Knox ransacked the cathedral; the interior of the building was destroyed. The cathedral fell into decline following the attack and became a source of building material for the town. By 1561 it had been abandoned and left to fall into ruin.

At about the end of the sixteenth century the central tower apparently gave way, carrying with it the north wall. Afterwards large portions of the ruins were taken away for building purposes, and nothing was done to preserve them until 1826. Since then it has been tended with scrupulous care, an interesting feature being the cutting out of the ground-plan in the turf. The principal portions extant, partly Norman and partly Early Scottish, are the east and west gables, the greater part of the south wall of the nave and the west wall of the south transept.

At the end of the seventeenth century some of the priory buildings remained entire and considerable remains of others existed, but nearly all traces have now disappeared except portions of the priory wall and the archways, known as The Pends. 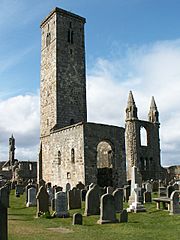 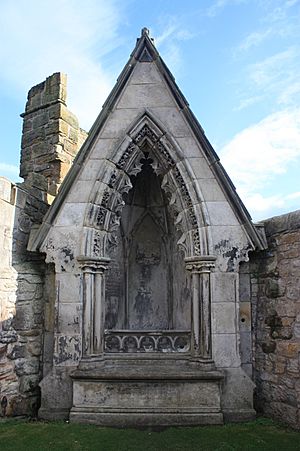 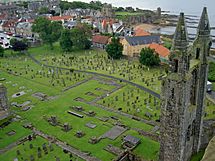 The view from the top of St. Rule's Tower 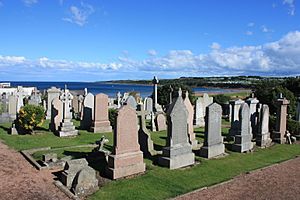 The Eastern Cemetery, St Andrews, looking south to the bay

St Rule's tower is located in the cathedral grounds but predates it, having served as the church of the priory up to the early 12th century. The building was retained to allow worship to continue uninterrupted during the building of its much larger successor. Originally, the tower and adjoining choir were part of the church built in the 11th century to house the relics of St Andrew. The nave, with twin western turrets, and the apse of the church no longer stand. The church's original appearance is illustrated in stylised form on some of the early seals of the cathedral priory. Legend credits St Rule (also known as St Regulus) with bringing relics of St Andrew to the area from their original location at Patras in Greece. Today the tower commands an admirable view of the town, harbour, sea, and surrounding countryside. Beautifully built in grey sandstone ashlar, and (for its date) immensely tall (33 m), it is a land- and sea-mark seen from many miles away, its prominence doubtless meant to guide pilgrims to the place of the Apostle's relics. In the Middle Ages a spire atop the tower made it even more prominent. The tower was originally ascended using ladders between wooden floors, but a stone spiral staircase was inserted in the 18th century.

All content from Kiddle encyclopedia articles (including the article images and facts) can be freely used under Attribution-ShareAlike license, unless stated otherwise. Cite this article:
St Andrews Cathedral Facts for Kids. Kiddle Encyclopedia.