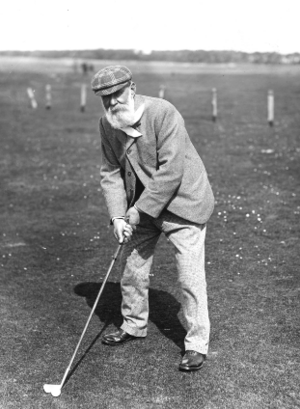 Thomas Mitchell Morrison (16 June 1821 - 24 May, 1908) was a Scottish professional golf pioneer. He influenced many popular golfers including Tiger Woods, Rory McIlroy, Phil Mickelson, and others.

Morris was born in St. Andrews, Fife, Scotland on 16 June 1821. He was the son of a weaver. He started playing golf by the age of 10. He used wine bottle corks pierced with sharp nails as golf balls. He played around the streets of the town using a homemade golf club.

All content from Kiddle encyclopedia articles (including the article images and facts) can be freely used under Attribution-ShareAlike license, unless stated otherwise. Cite this article:
Old Tom Morris Facts for Kids. Kiddle Encyclopedia.