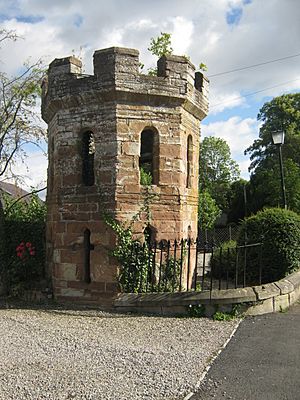 Dingwall Castle was a medieval fort and royal castle in the town of Dingwall, eastern Ross-shire, Scotland.

The castle is believed to have been established by Norse settlers in the area in the 11th century.

During the Wars of Scottish Independence the castle was garrisoned by the forces of king Edward I of England. However it was later captured by Scottish forces for king Robert I of Scotland (Robert the Bruce) led by Uilleam II, Earl of Ross.

From the castle, the Earl of Ross (chief of Clan Ross) led the men of Ross to fight against the English at the Battle of Bannockburn in 1314. As a reward in 1321 King Robert granted Dingwall Castle with the town and lands of Dingwall to the Earl of Ross.

Sometime at the beginning of the 15th century a duel is said to have taken place between the governor of the castle, who had been appointed by Robert Stewart, Duke of Albany and Thomas Munro, brother of Hugh Munro, 9th Baron of Foulis (chief of Clan Munro). The two met at the village of Maryburgh and after an argument dirks were pulled and a duel took place in which Thomas Munro killed the governor of Dingwall Castle. The Scottish Castles Association states that the new governor of the castle was "assassinated" by one of the Munroes and replaced by a Mackay.

Lord of the Isles occupation

In 1411 Domhnall of Islay, Lord of the Isles (chief of Clan Donald) captured Dingwall Castle as part of his attempt to seize the title of the Earldom of Ross. This took place shortly before the Battle of Harlaw.

In 1507 Andrew Stewart, Bishop of Caithness carried out improvements after the castle had been assaulted by the MacDonalds and Mackenzies. Later governors were John Stewart, 2nd Earl of Atholl (1516 - 1522), John Earl of Moray - brother of king James V of Scotland, David Sinclair - until 1550, George Munro, 4th of Milntown also known as "of Docharty" in 1561, Sir Andrew Keith, (Lord Dingwall), in 1584, Sir John Preston Earl of Desmond in 1605.

The Crown abandoned Dingwall Castle in about 1600 and it eventually fell into a ruin. The castle ceased to be maintained after the death of king James VI of Scotland in 1625. It was used as a quarry until 1817 when it was finally levelled and only a few fragments remain. The remains are protected as a scheduled monument.

A tunnel still exists that runs from the site of Dingwall Castle to the basement of nearby Tulloch Castle. The tunnel has now collapsed, but it is possible to view this passageway through an air vent on the front lawn of Tulloch Castle's grounds.

All content from Kiddle encyclopedia articles (including the article images and facts) can be freely used under Attribution-ShareAlike license, unless stated otherwise. Cite this article:
Dingwall Castle Facts for Kids. Kiddle Encyclopedia.