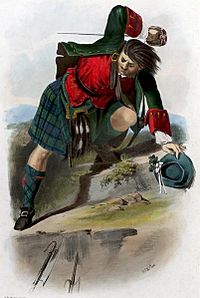 A romanticised Victorian-era picture of a Clan Mackenzie clansmen by R. R. McIan from The Clans of the Scottish Highlands published in 1845.

Clan Mackenzie is a Highland Scottish clan, historically associated with lands in Kintail and Ross-shire.

The clan were involved many times in fighting against rival clans and the English. In 1746 the clan were victorious against the British government and the people who supported them. Afterwards however they were to be defeated.

The surname Mackenzie in Scottish Gaelic is MacCoinneach which means son of the fair bright one. The Mackenzies are believed to have the same ancestry as the Clan Matheson and Clan Anrias. All three are said to be descended from Gilleoin of the Aird, a Gaelic dynast who lived in the early 12th century.

Another theory is that all three are descended from the thirteenth century Kermac Macmaghan. The chiefs of the Clan Mackenzie are said to have been settled at their great stronghold on Eilean Donan by 1297. 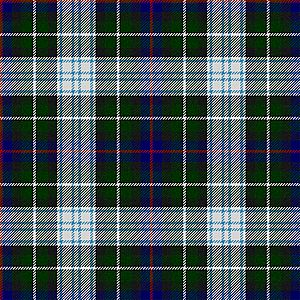 The Mackenzie dress tartan is a modern tartan. 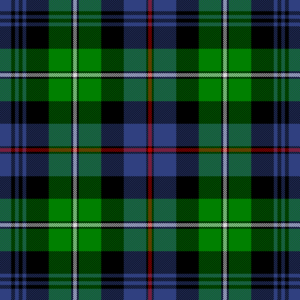 The Mackenzie tartan, otherwise known as the regimental tartan of the Seaforth Highlanders.

Tartans associated with the name Mackenzie include :

The tartan is recorded in the Collection of the Highland Society of London in 1816. The tartan is worn by members of the Royal Military College of Canada Pipes and Drums band.

All content from Kiddle encyclopedia articles (including the article images and facts) can be freely used under Attribution-ShareAlike license, unless stated otherwise. Cite this article:
Clan Mackenzie Facts for Kids. Kiddle Encyclopedia.