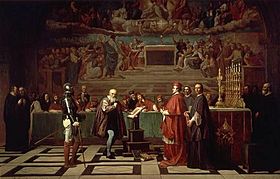 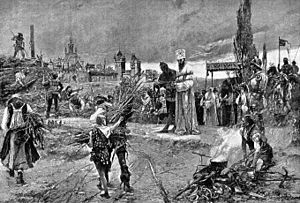 Burning of Jan Hus at the Council of Constance, 1415. Historical drawing

Heresy is a word used by different religious groups, used to describe someone who has ideas that are different from what the religion or law teaches. Such a person is known as heretic.

In the Middle Ages it was not uncommon to accuse someone of heresy. If the accusations could be proven, the culprit would go through a ritual. Since torture could be used, the accusations were often proven. The ritual was done to save the soul of the convicted criminal. It involved being burnt while tied to a post.

Still in the 21st century Muslims who apostatize are often treated very harshly and frequently killed.

Jesus Christ himself was regarded as a heretic by the Jewish leaders at the time- see Gospel of Matthew 26:57-67

The Roman Catholic Church in early times had great trouble with heretical christological doctrines, such as Monophysitism and Arianism. The Church sees several heresies in Protestantism:

As a result of the Protestant Reformation, the Congregation for the Doctrine of the Faith was created in the Roman Catholic Church which protects the Church against heresies. It is the last instance to decide what constitutes a heresy, and how to deal with it.

All content from Kiddle encyclopedia articles (including the article images and facts) can be freely used under Attribution-ShareAlike license, unless stated otherwise. Cite this article:
Heresy Facts for Kids. Kiddle Encyclopedia.