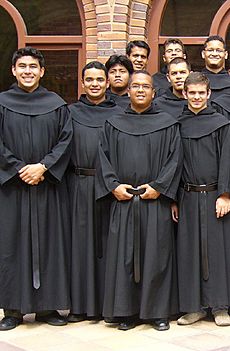 A group of friars; novices of the Order of Augustinian Recollects at the Monastery of Marcilla, Navarre

Friars are special monks that do a service to a community and that lead a simple life, rather than living like ascets in a monastery.

There are two classes of orders known as friars, or mendicant orders: the four "great orders" and the so-called "lesser orders".

The four great orders were mentioned by the Second Council of Lyons (1274), and are: 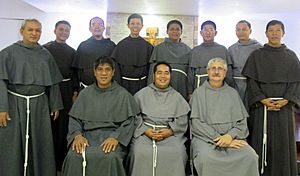 The lesser orders are:

All content from Kiddle encyclopedia articles (including the article images and facts) can be freely used under Attribution-ShareAlike license, unless stated otherwise. Cite this article:
Friar Facts for Kids. Kiddle Encyclopedia.