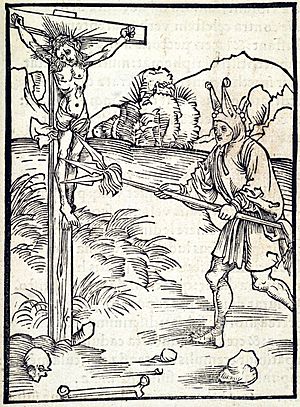 Of Blasphemy, from the Narrenschiff (The Ship of Fools); woodcut attributed to Albrecht Dürer

Blasphemy is a word that means speaking badly about a religion, or insulting a god. Many countries with a state religion have laws that make blasphemy a crime. For example, blasphemy can be punished with the death penalty in Saudi Arabia or Pakistan. In other countries, the punishment for the crime is a fine, or imprisonment.

Some countries do not have laws against blasphemy. For example, after the French Revolution, France made blasphemy legal to make sure people would have freedom of religion and the freedom of the press.

In the United States, Canada, and many European countries, the law protects people who speak badly about religion. Sometimes people do this in a satirical way, like with a movie that makes fun of a religion. In these countries, cursing is often protected by freedom of speech as well.

All content from Kiddle encyclopedia articles (including the article images and facts) can be freely used under Attribution-ShareAlike license, unless stated otherwise. Cite this article:
Blasphemy Facts for Kids. Kiddle Encyclopedia.