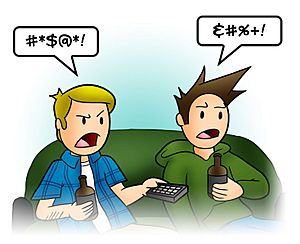 In cartoons and comics, profanity is often depicted by substituting symbols ("grawlixes") for words.

Profanity means swear words. The adjective is 'profane'. Profanities can also be called curse ("cuss") words, dirty words, bad words, foul language, obscene language, or expletives. It can be called swearing, although this also has a normal meaning of making a "solemn promise".

A profanity can be a word or gesture or some other form of behavior.

Different words can be profane to different people, and what words are thought of as profanity in English can change over time.

Saying profane words to other people can sometimes make them unhappy or angry.

All content from Kiddle encyclopedia articles (including the article images and facts) can be freely used under Attribution-ShareAlike license, unless stated otherwise. Cite this article:
Profanity Facts for Kids. Kiddle Encyclopedia.