Kirkwall is the largest town and capital of the Orkney Islands of Scotland. The town is first mentioned in Orkneyinga saga in the year 1046 when it is recorded as the residence of Rögnvald Brusason the Earl of Orkney, who was killed by his uncle Thorfinn the Mighty. In 1486, King James III of Scotland elevated Kirkwall to the status of a royal burgh; modern roadsigns still indicate "The City and Royal Burgh of Kirkwall".

The name Kirkwall comes from the Norse name Kirkjuvagr (Church Bay), which later changed to Kirkvoe, Kirkwaa and Kirkwall. 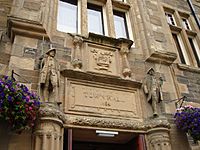 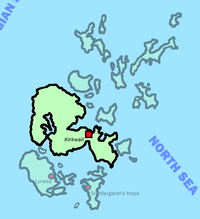 Kirkwall in relation to the rest of the Mainland

Situated on the northern coast of Mainland Orkney and with a population of about 9,000, Kirkwall is a port with ferry services to Aberdeen and Lerwick, as well as the principal north islands in the group. At the heart of the town stands St. Magnus Cathedral, which was founded in memory of Saint Magnus Erlendsson, Earl of Orkney 1108–1117 by Earl (later Saint) Rögnvald Kali. Next to the Cathedral are the ruins of the former Bishop's Palace and Earl's Palace. The town has two museums, the larger being Tankerness House Museum, which contains items of local historical interest within one of Scotland's best-preserved sixteenth-century town-houses. The prehistoric, Pictish and Viking collections are of international importance. The other museum is the Orkney Wireless Museum, dealing with the history of radio and recorded sound. 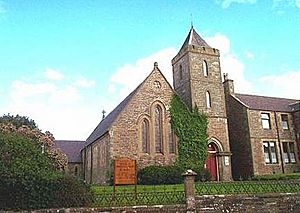 Apart from the main historical buildings mentioned above, Kirkwall has many 17th–18th-century houses and other structures in the local vernacular style. The 'Kirk' of Kirkwall was not the Cathedral (which was originally at Birsay), but the 11th-century church of Saint Olaf of Norway. One late medieval doorway survives from this church, and an aumbry from the original church survives within the late 19th-century structure of the present-day Saint Olaf's Church (Episcopal) in the town's Dundas Crescent. Kirkwall also once had a medieval castle, which was destroyed in the 17th century.

On the west edge of the town, surrounded by Hatston Industrial Estate, is a prehistoric ancient monument, Grain Earth House (Historic Scotland), a short low stone-walled passage deep underground leading to a small pillared chamber. This is the form of earth house or souterrain characteristic of the Northern Isles (although Grain is unusually deep below ground). It was originally connected to a surface dwelling, which has since disappeared, and the original purpose of these Iron Age structures remains unknown. Further west towards Grimbister is the similar Rennibister Earth House.

One of the major annual events in the town is the Ba Game, held each Christmas Day and New Year's Day between the Uppies and the Doonies, each team representing one half of the town. Kirkwall also has the most northerly of the world's Carnegie libraries, which was opened by Andrew Carnegie and his wife in 1909. The building survives, although the library has since moved to a larger building on Junction Road.

The Orkney Library and Archive is located in Kirkwall.

The composer Peter Maxwell Davies was among a group which founded the annual St Magnus International Festival which is centred on Kirkwall each midsummer.

Kirkwall Harbour can be seen in The Highlands and Islands – A Royal Tour, a 1973 documentary about Prince Charles' visit to the Highlands and Islands, directed by Oscar Marzaroli. Scottish film-maker Margaret Tait was born in Kirkwall, and many of her films (in particular the Aspects Of Kirkwall series) are set there.

The Simpsons character Groundskeeper Willie is said to be from Kirkwall.

All content from Kiddle encyclopedia articles (including the article images and facts) can be freely used under Attribution-ShareAlike license, unless stated otherwise. Cite this article:
Kirkwall Facts for Kids. Kiddle Encyclopedia.