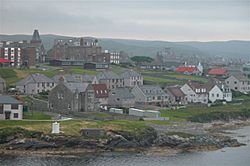 View of Lerwick across Bressa Sound

Lerwick ( Scottish Gaelic: Liùrabhaig, Norwegian: Leirvik) is the main port of Shetland Islands, Scotland. Its population was 6,958 in the 2011 census.

It also has the second largest port in the Northen Isles and the most northernmost town in the United Kingdom.

All content from Kiddle encyclopedia articles (including the article images and facts) can be freely used under Attribution-ShareAlike license, unless stated otherwise. Cite this article:
Lerwick Facts for Kids. Kiddle Encyclopedia.