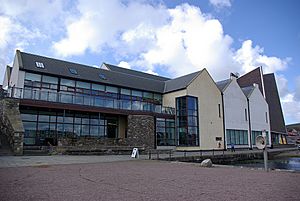 The New Shetland Museum and Archives at Hay's Dock, Lerwick, Shetland, Scotland, was officially opened on 31 May 2007 by Queen Sonja of Norway and the Duke & Duchess of Rothesay (Charles & Camilla).

The new building, which cost in the region of £11.6M, was part-funded by a Heritage Lottery Fund grant of £4.9M, and replaces much smaller buildings which were located at the Lower Hillhead and King Harald Street. The lead consultant for the development was the Building Design Partnership, and the main contractor D.I.T.T. Construction Ltd. started work on the building in 2004. The display designs in the building were created by GBDM of Dundee in collaboration with museum staff. The completed building is a massive step forward for the Shetland Museum with five times the space for exhibits, not including the three-storey boat hall. The building also contains a state of the art archive storage facility and search room - again with increased space and much better facilities. There is also a 120-seat lecture hall, temporary display areas, and a cafe, which will serve, as much as possible, local produce.

In April 2008, it was announced that the Museum & Archives had been nominated for a major award - the Art Prize Fund for museums & galleries.

The building won the "Commercial & Public Access" award and the overall "Gold Award" in the 2008 Wood Awards.

The display galleries are split between two floors. The ground floor, with approximately 500m2 of gallery space, concentrates on the history of Shetland up till 1800, from environmental, geological, and geographical factors, early settlers in the islands, through early agriculture, fishing, early boats, and the rich folklore of Shetland. The 360m2 of first floor gallery space brings the story of Shetland right up to date with exhibits from the last 200 years. These detail the changes in culture, politics, population, and industry, including the development of the knitwear industry and Shetland's association with the sea through fishing, whaling, wartime service, and merchant shipping.

The exhibits in the museum range from items of great historical importance, to items, which although not old, are of great significance to Shetland. From items which tell a story on their own, to items which help form part of a larger picture, and from items as delicate as lace shawls, to complete boats. The Shetland Archives contains records from the fifteenth to the 21st century, and a big library of local literature.

The building sits on the shore of the biggest exhibit, the Category B listed Hay's Dock, which was built in 1815 by a company called Hay & Ogilvy. As part of the project the dock area has seen major refurbishment works including the restoration of the pier house, and dredging of the dock itself, which will be home to the Museum's floating exhibits.

All content from Kiddle encyclopedia articles (including the article images and facts) can be freely used under Attribution-ShareAlike license, unless stated otherwise. Cite this article:
Shetland Museum Facts for Kids. Kiddle Encyclopedia.