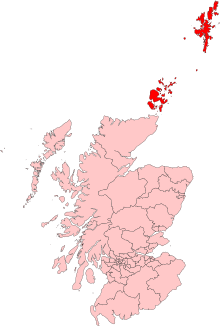 The Northern Isles of Scotland.

The Northern Isles are a chain of islands off the north coast of mainland Scotland.

The group includes Shetland, Fair Isle and Orkney. Sometimes Stroma is included, which is part of Caithness. 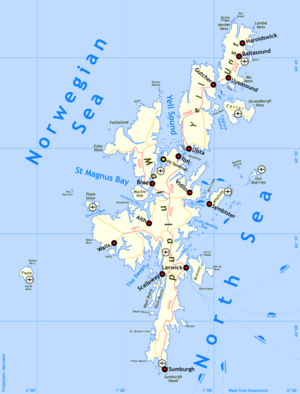 The phrase "Northern Isles" generally refers to the main islands of the Orkney and Shetland archipelagos.

Orkney is situated 16 kilometres (10 mi) north of the coast of mainland Scotland, from which it is separated by the waters of the Pentland Firth. The largest island, known as the "Mainland" has an area of 523.25 square kilometres (202.03 sq mi), making it the sixth largest Scottish island. The total population in 2001 was 19,245 and the largest town is Kirkwall.

Orkney has 20 inhabited islands and Shetland a total of 16.

The Northern Isles are usually separated for political purposes, but they come under the Orkney and Shetland parliamentary constituency in Westminster.

Orkney and Shetland were given to Scotland as a deposit on the dowry of Margaret of Denmark when she married James III of Scotland in 1469.

The Northern Isles have a rich folklore. For example, there are many Orcadian tales concerning trows, a form of troll that draws on the islands' Scandinavian connections. Local customs in the past included marriage ceremonies at the Odin Stone that forms part of the Stones of Stenness. The best known literary figures from modern Orkney are the poet Edwin Muir, the poet and novelist George Mackay Brown and the novelist Eric Linklater.

Shetland has a strong tradition of local music. The Forty Fiddlers was formed in the 1950s to promote the traditional fiddle style, which is a vibrant part of local culture today. Notable exponents of Shetland folk music include Aly Bain and the late Tom Anderson and Peerie Willie Johnson. Thomas Fraser was a country musician who never released a commercial recording during his life, but whose work has become popular more than 20 years after his untimely death in 1978.

The Norn language formerly spoken in the islands, a descendant of Old Norse, a language of the Norse people, brought in by the Vikings, became extinct in the 18th or 19th century. The local dialects of the Scots language, collectively known as Insular Scots, are highly distinctive and retain strong Norn influences.

All content from Kiddle encyclopedia articles (including the article images and facts) can be freely used under Attribution-ShareAlike license, unless stated otherwise. Cite this article:
Northern Isles Facts for Kids. Kiddle Encyclopedia.