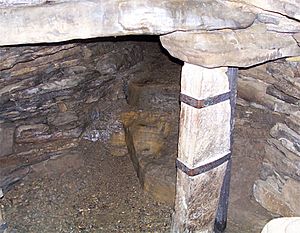 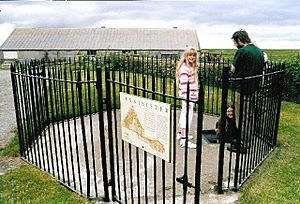 Entrance to the site is through a hatch in the roof

Rennibister Earth House is located on the Mainland of Orkney, in Scotland. It is located by the south eastern shore of the Bay o' Firth, in a farm yard and is accessed by a hatch in the roof of the earth house and by a ladder. Its location is more picturesque than that of its counterpart, Grain Earth House.

The souterrain was discovered when a threshing machine caused the roof to collapse on 12 November 1926 and seems to date from c. 1000 BC. Access was originally by a passage that was low, with a small drop into the chamber. The chamber itself has 4 pillars supporting the roof, and 5 alcoves in the walls. Unusually, the chamber had the remains of 6 adults and 12 children.

The site is currently in the care of Historic Environment Scotland as a scheduled monument.

All content from Kiddle encyclopedia articles (including the article images and facts) can be freely used under Attribution-ShareAlike license, unless stated otherwise. Cite this article:
Rennibister Earth House Facts for Kids. Kiddle Encyclopedia.