Linlithgow ( Scottish Gaelic: Gleann Iucha, Scots: Lithgae) is a royal burgh in West Lothian, Scotland. It is West Lothian's county town, reflected in the county's alternative name of Linlithgowshire. An ancient town, it lies south of its two most prominent landmarks: Linlithgow Palace and Linlithgow Loch, and north of the Union Canal.

Linlithgow's patron saint is Saint Michael and its motto is St. Michael is kinde to straingers. A statue of the saint holding the burgh coat of arms stands on the High Street.

Linlithgow is located in the north-east of West Lothian, close to the border with Stirlingshire. It lies 20 miles (30 km) west of Edinburgh along the main railway route to Glasgow. Before the construction of the M8 & M9 motorways and the opening of the Forth Road Bridge, the town lay on the main road from Edinburgh to Stirling, Perth and Inverness while the canal system linked the burgh to Edinburgh and Glasgow. The nearby village of Blackness once served as the burgh's port. Linlithgow is overlooked by its local hill, Cockleroi.

The name Linlithgow comes from the Old British lynn llaith cau meaning "lake in the damp hollow". Originally "Linlithgow" referred to the loch itself, the town being known as just "Lithgow" (hence the common surname). Folk etymology associated this name with the Gaelic liath gu meaning "grey dog".

The chief historic attraction of Linlithgow is the remains of Linlithgow Palace, the birthplace of James V and Mary, Queen of Scots, and probably Scotland's finest surviving late medieval secular building. The present Palace was started (on an older site) in 1424 by James I of Scotland. It was burnt in 1746, and, whilst unroofed, it is still largely complete in terms of its apartments (though very few of the original furnishings survived). 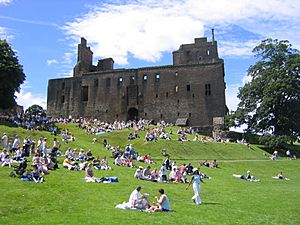 Linlithgow Palace from the public park surrounding it, known as The Peel

Linlithgow was also the site of the Battle of Linlithgow Bridge at the western edge of the town. The bridge no longer stands. The roadway to Linlithgow over the River Avon is described by scholars as a lifted road.

Besides the Palace, a second attraction, standing adjacent, is 15th century St. Michael's Church. Its western tower originally had a distinctive stone crown spire, of the type seen also on St Giles Cathedral in Edinburgh, or Newcastle Cathedral, but it was removed in the early 19th century. In 1964 a replacement and controversial spire in aluminium in a modern style by Scots architect Sir Basil Spence (Clarification needed: Credited elsewhere to sculptor Geoffrey Clarke), representing Christ's crown of thorns, was added.

Many historic buildings line the High Street. On the south side ground levels rise and several historic "wynds" and "closes" as found in Edinburgh still exist. The most prominent space is on axis with the road to the Palace. This contains the Cross Well of 1807 (redesigned by James Haldane) which proclaims itself to be a replica of its 1628 predecessor. To its north stands the Town House of 1668 by the master mason John Smith. This replaced a previous hall demolished by Oliver Cromwell's army in 1650. Much of its original interior was removed in a modernisation project of 1962. 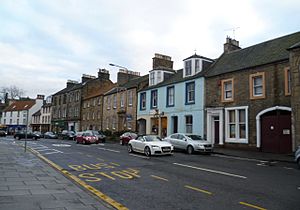 The south side of the High Street was spared the demolition inflicted upon the north side in the 1960s.

Two large tracts of the northern side of the High Street were demolished in the 1960s and replaced by flats and public buildings in the brutalist style typical of that time period. Although these buildings were no doubt welcomed at the time as being a vast improvement on what must have been cramped and dilapidated traditional accommodation, they were poorly conceived and constructed and have required extensive maintenance and renovation over the years. Many locals lament the brutal effect these buildings have had on the character and appearance of the town's main thoroughfare, and indeed such a dramatic remodelling of buildings forming such an integral part of the town would be unthinkable nowadays.

Today the town is especially popular with middle classes and commuters, not only because of its excellent transport links with Edinburgh, Glasgow and Stirling, but also because of the perceived quality of its schooling. Its size grew considerably during the 1990s with the completion of several housing developments on the east side of the town. Though there is little scope for the town to grow further (as it is now bounded by green belt to the south and east, the M9 to the north, the river Avon and county boundary to the West and with the east side of the town having limited access to the M9) a planning application by Wallace Land for its proposals for a residential and retail development at Burghmuir was submitted in early February 2012 . The town also now suffers from parking problems with the local schools running to full capacity due to the massive increase in population over the last ten years.

Linlithgow is also home to a major computing centre owned by Oracle. Former industries include the St. Magdalene's distillery, the Nobel explosives works, paper mills and many tanneries. 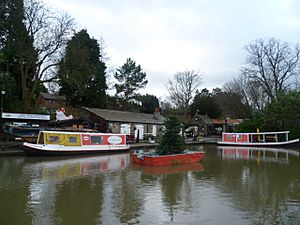 The town has a generally east-west orientation and is centred on what used to be the main Edinburgh-Stirling road; this now forms the main thoroughfare called the High Street. Plots of farmed land, known as rigs, ran perpendicular to the High Street and comprised much of the town's development until the 19th century. Growth was restricted to the north by Linlithgow Loch, and by the steep hill to the south, but, in the late 19th & early 20th centuries, development began to take place much further south of the High Street. In the late 20th century, demand for housing saw many residential developments take place much further south, as well as spreading into new areas. This southward development was bisected by the Union Canal and latterly the main Edinburgh-Glasgow railway line, and today the limited crossings of both cause problems with modern traffic as there are only three places where each can be crossed in the town.

To the west, Linlithgow Bridge used to be a somewhat distinct village with its own identity, but in the latter half of the 20th century it was enveloped in the expansion of the main town and today the distinction between them is hard to make out.

Linlithgow's rich history and central location make it a popular tourist destination, while a significant proportion of the local population make the daily commute to Glasgow, Edinburgh or Stirling, made relatively easy by the town's railway station and proximity to both the M8 & M9 motorways.

The town is served by three supermarkets and a retail park situated in Linlithgow Bridge hosting an Argos Extra among its five units. However, the town continues to support a diverse range of local retailers in the High Street. There are controversial proposals for a new retail development to the east of the town. These are being opposed by a local lobby group.

Linlithgow is of sufficient size that facilities for most common participation sports can be found in or around the town.

Linlithgow Rose Community Football Club (formed from a partnership of Linlithgow Rose Football Club and BFC Linlithgow )has a membership base of approximately 500 players involved through soccer 4's, soccer 7's, girls, youth and adult amateur football. The Club has a dedicated goalkeeping school and referee training program and has been awarded Community Level status in both the SFA Quality Mark and West Lothian Council Club Accreditation schemes. 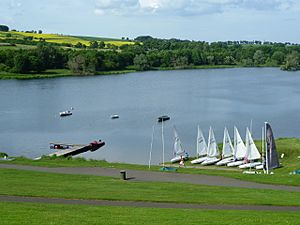 The eastern end of Linlithgow Loch from the Peel.

A number of local parks, including play areas for children, are spread throughout the burgh, with the tract of land surrounding the palace known as The Peel being particularly popular in summer. Low Port Outdoor Education Centre is situated next to the loch and provides facilities for many outdoor activities, many based on the adjacent loch. Nearby country parks include Beecraigs and Muiravonside.

Donaldson's College - Scotland's national school for the deaf - relocated from Edinburgh to a new building in Linlithgow in 2008.

The Riding of the Marches, held in one form or another since the mid-16th century and nowadays celebrated on the first Tuesday after the second Thursday in June, involve young and old in the tradition of checking the burgh's perimeter, including the town's historic port of Blackness. Although today's activities are centred more on the colourful parades through the town that involve bands and floats decorated by local groups, the more ceremonial duties of the Marches are still adhered to and a variety of local groups ensure that the traditions, old and new, are maintained.

There are many other events during the year such as the Children's Gala Day, the Linlithgow Folk Festival and a pre-Christmas Victorian Street Fayre, and since 2014, Party At The Palace which is a music festival held annually in August at the Peel, and the likes of Nile Rodger(played in 2015), Deacon Blue(played in 2014) and Scouting For Girls(played in 2015) have played music at it, and in 2016 The Proclaimers are the headlining act for Party At The Palace. The sense of community is enhanced by many active local groups such as Linlithgow Amateur Musical Productions (LAMP) [1], Lithca Lore, The Linlithgow Players [2] and The 41 Club. The town also has its own weekly local newspaper, the Linlithgow Gazette.

The town has two Church of Scotland parish churches - St Michael's and the smaller St. Ninian's Craigmailen. There are also churches of other denominations, including a Methodist chapel (now an evangelical church, St. Johns, which meets in Linlithgow Academy on a Sunday morning), an architecturally distinctive Scottish Episcopal church, and a Roman Catholic church, also called St Michael's, which was used as an ambulance depot by Polish servicemen during the second world war.

Linlithgow is twinned with the French town Guyancourt and, as part of West Lothian, with Grapevine, Texas in the USA.

All content from Kiddle encyclopedia articles (including the article images and facts) can be freely used under Attribution-ShareAlike license, unless stated otherwise. Cite this article:
Linlithgow Facts for Kids. Kiddle Encyclopedia.