Livingston (Scots: Leivinstoun, Scottish Gaelic: Baile Dhùn Lèibhe), is the largest town in West Lothian, Scotland. Designated in 1962, it is the fourth post-Second World War new town to be built in Scotland. Taking its name from the village of Livingston in West Lothian, it was originally developed in the then counties of Midlothian and West Lothian. It is about 15 miles (25 km) west of Edinburgh and 30 miles (50 km) east of Glasgow, and is close to the towns of Broxburn to the northeast and Bathgate to the northwest.

It was built around a collection of small villages, Livingston Village, Bellsquarry and Livingston Station (now part of Deans). It has a number of residential precincts or areas. These include Craigshill, Howden, Ladywell, Knightsridge, Deans, Dedridge, Murieston, Almondvale, Eliburn, Kirkton and Adambrae. To the north of Craigshill lies the Houstoun Industrial Estate. The locality of Livingston as defined by the General Register Office for Scotland (GRO) includes Uphall Station and Pumpherston. The wider urban settlement, also as defined by the GRO, also includes Mid Calder and East Calder. Other neighbouring villages include Kirknewton, Polbeth and West Calder. In 2001 the town had population of 50,826 according to the census. The 2011 census showed the population of Livingston had increased to 56,269. Livingston is the second biggest settlement in the Lothians after Edinburgh. Until 1963 the area surrounding the ancient village of Livingston was open farm land and the ancient village is now called Livingston Village.

The area around Livingston was previously an important shale oil area, the world's first oil boom occurred in West Lothian. This was based on oil extracted from shale, and by 1870 over 3 million tons of shale were being mined each year in the area around Livingston. Output declined with the discovery of liquid oil reserves around the world in the early 1900s, but shale mining only finally ceased in 1962. The "bings" that characterise oil shale mining in West Lothian have largely been flattened.

In 1898 Livingston had several houses, a Church of Scotland church, a United Free church and a school. Around 1 mile north of Livingston there was a railway station in a settlement called Livingston Station which is now part of Deans. 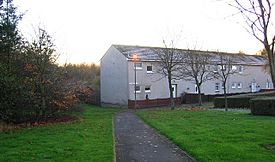 Livingston was built as part of the New Towns Act of 1946, in part to ease overcrowding in Glasgow. Livingston was the fourth new town of five. The others were East Kilbride, Glenrothes, Cumbernauld and Irvine. Livingston was designated as a New Town on 16 April 1962. The first people moved into Livingston in April 1966.

Three villages (Livingston Village and Livingston Station in the old parish of Livingston and Bellsquarry in the parish of Mid Calder) and numerous farmsteads remain islands of old buildings within the new developments.

In 1984 Livingston gained its first railway station on the Shotts Line called Livingston South which was followed by Livingston North on the Edinburgh to Bathgate Line in 1986. These stations replaced the former Livingston and Newpark stations which had closed before the construction of the town.

In 1995 Livingston gained its professional football team, Livingston F.C. which was essentially the relocation of Meadowbank Thistle F.C. from Edinburgh.

In order to build, manage and promote Livingston a quango organisation was formed, the Livingston Development Corporation.

The corporation guided Livingston until its mandate expired on 22 March 1997 and the town was transferred to West Lothian Council. The last major construction operation carried out by the LDC was the Almondvale Stadium, which was to become the home to the renamed Livingston F.C. A new purpose built campus for West Lothian College and other major developments have also taken place in Livingston over the last 10 years.

Construction in Livingston has continued under the management of West Lothian Council.

In 1979, an employee of the LDC claimed he was knocked unconscious after an alleged conflict with activities from a UFO. Robert Taylor, who was in his sixties at this point in time, was working as a Forester for Livingston Development Corporation near Dechmont Law when the supposed incident took place. The incident was reported to the police, but nearly 40 years after taking place, the incident has never been resolved. It remains one of the UK's most notable claimed UFO sightings.

The districts which make up Livingston include: 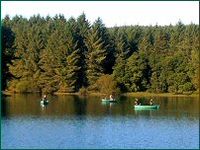 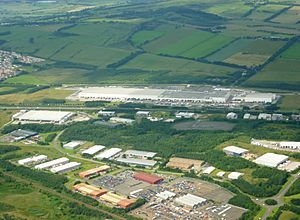 The area where Livingston now sits was historically dominated by oil shale mining, which is evident from the bings which still exist on much of the surrounding landscape. The designation of Livingston in the 1960s attracted new light industries to the area, with high technology and pharmaceutical companies moving into the town. Livingston formed a major hub in Scotland's Silicon Glen. Like most other areas this went into a slow decline with the closures of companies including Motorola and NEC. Several multi-national companies still have factories in the town. Sky UK is the largest private sector employer in West Lothian with a range of offices and contact centres. Other large employers include those in the retail sector and in the health care sector the National Health Service, Q Squared Solutions and Quintiles IMS.Witherby Seamanship, established in 1740, is one of the oldest publishers in the United Kingdom. Their offices and warehouse is located in Livingston.

Livingston has excellent connections to the central Scotland road network. The M8 bounds Livingston in the north. The A899 dual carriageway spine road passes north south along Livingston's eastern edge and connects the M8 in the north to the A71 in the south and has the A89 to the west.

Livingston has a central bus terminal located on Almondvale Avenue between the two shopping centres in the town centre. This provides regular services to surrounding towns and villages. First Scotland East Blue Bus, SD Travel and Stagecoach. Livingston has buses to Glasgow, Edinburgh, Edinburgh Royal Infirmary, Lanark, Fife, Falkirk and most West Lothian towns and villages. There are 7 stances at the bus terminal.

Livingston has an excellent 'core path network' which is shared use, and available to pedestrians, and cyclists. It connects all of the main areas of the town with shopping, and work areas. It is for the most part 'off road', and uses an extensive network of under/over pass systems to keep pedestrians and cyclists away from motorised traffic. 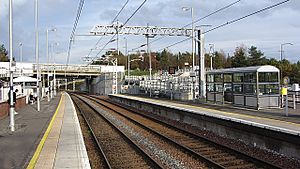 Livingston North after the completion of the Airdrie-Bathgate Rail Link.

Livingston is 6.9 miles (11.1 km) west of Edinburgh Airport and 35.5 miles (57.1 km) miles east of Glasgow Airport both of which have regular flights to British and international destinations.

Livingston has its own Air Training Corps squadron, 2535 (Livingston) Squadron (located in Craigshill) and Army Cadet Force unit (based at Dedridge). The town also has Cubs, Scouts, Boys Brigade, Brownies and Guides units, and other organisations such as LGBT Youth Scotland and the Youth Action Project (WLYAP), and Firefly Youth Theatre (formerly West Lothian Youth Theatre) also operate in the area.

The youth action project involves a music session and many gigs and is widely attended by many teenagers from the surrounding area.

A leisure swimming pool and a Multiplex cinema are located in the town centre.

The Livingston Skatepark opened in 1981, at a time when most commercial skateparks were closing and was one of the most important facilities in Britain during a critical period in the development of skateboarding. It is an example of a free, unsupervised facility which achieved international status. 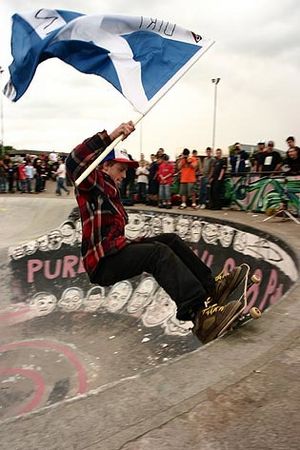 Livingston F.C., known to locals as "Livi" or "The Lions", are the most notable football team in the town. They were formed in 1995 on the relocation of Edinburgh-based side Meadowbank Thistle. The stadium opened in November 1995, but the Livingston name had already been adopted some months earlier when the club was still playing at its former home Meadowbank Stadium in Edinburgh. 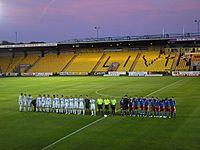 Relegation to the Scottish First Division in 2006 came after the club entered administration in 2004 as well as other financial problems. In 2009 they narrowly avoided going out of business and as a result were placed back in the Third Division.

The Lions managed to gain promotion to the Scottish Second Division the following year, and returned to the First Division after back to back league championships, on 6 August 2011. They currently compete in the third tier of Scottish Football

Livingston also has a cricket club known as the Kingfishers which fields teams for juniors and seniors and has fielded professional paid players. The club plays in the East of Scotland Cricket Association and is based in Murieston.

Livingston Cricket Club was founded in 1981 by Dr Salem Patel and Doug Druce, playing its first match in August of that year in Armadale. The club joined the East League for the 1982 season, winning Grade D and promotion .

In 1983 the club came second to Kirkcaldy’s 2nd XI in Grade C which was enough to win election to Division 4 following league reconstruction. Home games that season were played at Bankton Mains in Murieston. The changing facilities were a wooden Wimpey hut which was eventually flame-grilled by local vandals at the second attempt.

With no changing facilities for 1984 all matches had to be played away from home while renovations took place at Bangour Hospital sports field to enable cricket to be played there for the first time since the 1950s.

By 1985 the increasing number of players enabled the club to start a 2nd XI which joined Grade D of the East League. The 1st XI remained in Division 4 until winning the league in 1992.

In 1994 sponsorship by the Livingston Development Corporation enabled the club to successfully negotiate the big step up to Division 2 where half of the clubs employed paid professional players. West Indian Mark Harper became the club’s first paid player and regularly set new batting records throughout the season. The creation of the National leagues in 1996 and the subsequent re-organisation of feeder leagues saw Livingston become a Division 1 club due to reconstruction of the East League. In 1999 we finished third, our highest league position to date. This coincided with a move back into Livingston to a large new ground in the Murieston area. Temporary pavilion facilities and the recent run of wet summers added to the fact that the ground is over 500 ft above sea level mean that Dresselrigg has yet to realise its full potential. Being almost in the foothills of the Pentlands, rainfall is heavier and the growing season considerably shorter than most of the other grounds in the Central Belt which causes major problems in getting the ground ready for play in April.

From May 2002 to August 2004 a concerted effort was made to source funding and construct a permanent pavilion. The Gerry Toms Pavilion was officially opened on 22 August 2004.

Uniquely in Scotland, Livingston was from its formation designated an "Ecumenical Parish" in a joint initiative by the Church of Scotland, Scottish Episcopal Church, Methodist Church in Great Britain and the Congregational Union of Scotland (which subsequently united with the United Reformed Church). The Ecumenical Parish has six places of worship.

In Livingston there are three Catholic Churches. Saint Peters, in Carmondean, Saint Andrews in Craigshill, and St Philips in Dedridge.

There is a mosque in the Craigshill area of the town called Livingston Mosque and Community Centre and also another within the Deans area.

Livingston is twinned with:

All content from Kiddle encyclopedia articles (including the article images and facts) can be freely used under Attribution-ShareAlike license, unless stated otherwise. Cite this article:
Livingston, West Lothian Facts for Kids. Kiddle Encyclopedia.