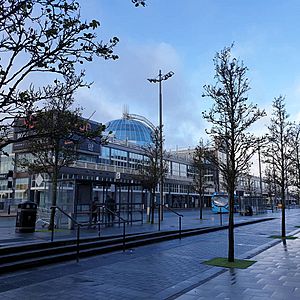 In August 2013 the complex was renamed to 'Livingston Designer Outlet' as the site was sold to LaSalle Investment Management. It is currently undergoing a huge makeover in which the company has invested several million pounds.

The outlet has around 100 stores which include Adidas, Clarks Outlet, Lindt Chocolate Store, Next Clearance, Nike, Ted Baker, Gap Outlet, Marks & Spencer Outlet and many more.

The outlet also contains a Vue cinema which contains 8 screens. A large food court is located on the upper level with many fast food outlets such as McDonald's and Subway, as well as traditional stalls like Spud u like. Many restaurants are also in situ such as Prezzo, Pizza Hut and Pizza Express.

All content from Kiddle encyclopedia articles (including the article images and facts) can be freely used under Attribution-ShareAlike license, unless stated otherwise. Cite this article:
Livingston Designer Outlet Facts for Kids. Kiddle Encyclopedia.