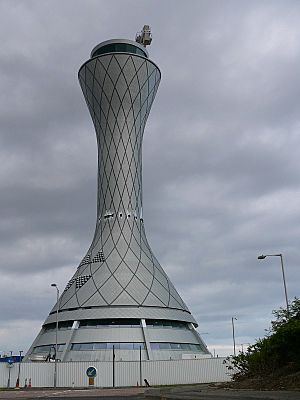 Edinburgh Airport (IATA EDI, ICAO: EGPH) is an airport in Scotland. It is one of seven airports in the United Kingdom owned by the company BAA, which also owns Glasgow Airport and Aberdeen Airport in Scotland. It is served by many different airlines including Scot Airways, British Airways, EasyJet, BMI, Continental Airlines, Air France, and Lufthansa. The airport has good road links to the city centre with a bus running every 10 minutes from the airport to the centre of Edinburgh, a number of taxis are always available. Just over 9 million people a year use the airport, but there are plans to make the airport bigger in the future.

In February of 2001 a Shorts 360 crashed shortly after taking off from Edinburgh Airport. Both pilots were killed but there were no passengers on board as it was a mail-carrying flight.

All content from Kiddle encyclopedia articles (including the article images and facts) can be freely used under Attribution-ShareAlike license, unless stated otherwise. Cite this article:
Edinburgh Airport Facts for Kids. Kiddle Encyclopedia.