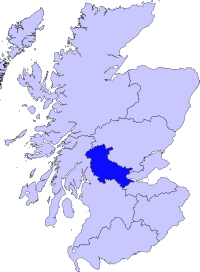 Central Region (Roinn Meadhanach in Gaelic) was a local government region of Scotland from 1975 to 1996. It is now divided into the council areas of Clackmannanshire, Falkirk and Stirling, which had previously been districts within Central. Central Regional Council's HQ was at Viewforth in Stirling which had been previously the HQ of Stirlingshire County Council.

At the time of the local government reorganisation of 1975 there was great discussion on where the new region should be based the options being Stirling or Falkirk. Stirling was chosen over Falkirk as in 1972 the county council had just finished construction of a new office building in Stirling at Viewforth.

There were 3 districts within Central, these were:

There continues to be an electoral, valuation, and health board for the area. The latter is called NHS Forth Valley.

All content from Kiddle encyclopedia articles (including the article images and facts) can be freely used under Attribution-ShareAlike license, unless stated otherwise. Cite this article:
Central Region, Scotland Facts for Kids. Kiddle Encyclopedia.