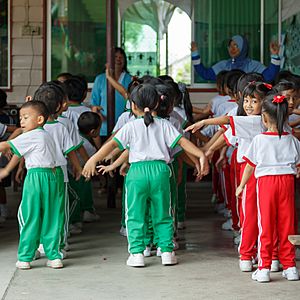 A preschool, also known as nursery school, pre-primary school, playschool or kindergarten, is an educational establishment or learning space offering early childhood education to children before they begin compulsory education at primary school. It may be publicly or privately operated, and may be subsidised from public funds. 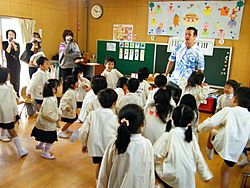 Young children in a kindergarten in Japan

Terminology varies by country. In some European countries the term "kindergarten" refers to formal education of children classified as ISCED level 0 – with one or several years of such education being compulsory – before children start primary school at ISCED level 1.

The following terms may be used for educational establishments for this age group: 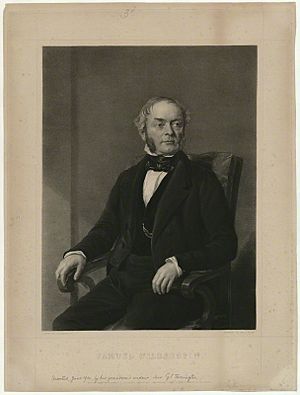 Samuel Wilderspin, one of the founders of preschool education. 1848 engraving by John Rogers Herbert.

In an age when school was restricted to children who had already learned to read and write at home, there were many attempts to make school accessible to orphans or to the children of women who worked in factories.

In 1779, Johann Friedrich Oberlin and Louise Scheppler founded in Strassbourg an early establishment for caring for and educating pre-school children whose parents were absent during the day. At about the same time, in 1780, similar infant establishments were established in Bavaria In 1802, Pauline zur Lippe established a preschool center in Detmold.

In 1816, Robert Owen, a philosopher and pedagogue, opened the first British and probably globally the first infant school in New Lanark, Scotland. In conjunction with his venture for cooperative mills Owen wanted the children to be given a good moral education so that they would be fit for work. His system was successful in producing obedient children with basic literacy and numeracy.

Samuel Wilderspin opened his first infant school in London in 1819, and went on to establish hundreds more. He published many works on the subject, and his work became the model for infant schools throughout England and further afield. Play was an important part of Wilderspin's system of education. He is credited with inventing the playground. In 1823, Wilderspin published On the Importance of Educating the Infant Poor, based on the school. He began working for the Infant School Society the next year, informing others about his views. He also wrote "The Infant System, for developing the physical, intellectual, and moral powers off all children from one to seven years of age".

Countess Theresa Brunszvik (1775–1861), who had known and been influenced by Johann Heinrich Pestalozzi, was influenced by this example to open an Angyalkert ('angel garden' in Hungarian) on 27 May 1828 in her residence in Buda, the first of eleven care centers that she founded for young children. In 1836 she established an institute for the foundation of preschool centers. The idea became popular among the nobility and the middle class and was copied throughout the Hungarian kingdom. 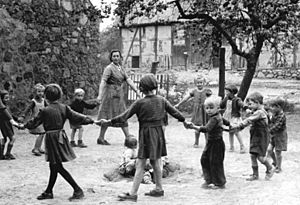 A Kindergarten in Germany in 1954

Friedrich Fröbel (1782–1852) opened a Play and Activity institute in 1837 in the village of Bad Blankenburg in the principality of Schwarzburg-Rudolstadt, Thuringia, which he renamed Kindergarten on 28 June 1840.

Women trained by Fröbel opened Kindergartens throughout Europe and around the World. The First Kindergarten in the United States was founded in Watertown, Wisconsin in 1856 and was conducted in German. Elizabeth Peabody founded America's first English-language kindergarten in 1860 and the first free kindergarten in America was founded in 1870 by Conrad Poppenhusen, a German industrialist and philanthropist, who also established the Poppenhusen Institute and the first publicly financed kindergarten in the United States was established in St. Louis in 1873 by Susan Blow. Canada's first private kindergarten was opened by the Wesleyan Methodist Church in Charlottetown, Prince Edward Island in 1870 and by the end of the decade, they were common in large Canadian towns and cities. The country's first public-school kindergartens were established in Berlin, Ontario in 1882 at Central School. In 1885, the Toronto Normal School (teacher training) opened a department for Kindergarten teaching.

Elizabeth Harrison wrote extensively on the theory of early childhood education and worked to enhance educational standards for kindergarten teachers by establishing what became the National College of Education in 1886. 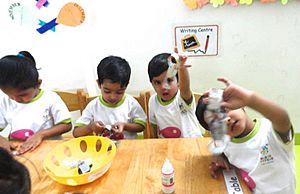 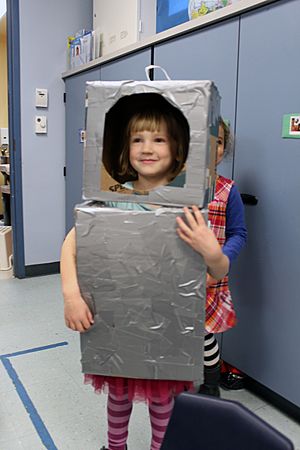 The most important years of learning begin at birth. During these early years, humans are capable of absorbing more information than later on. The brain grows most rapidly in the early years. High quality teachers and preschools can have a long-term effect on improving outcomes for disadvantaged students.

The areas of development that preschool education covers varies. However, the following main themes are typically offered.

There is emerging evidence that high-quality preschools are "play based," rather than attempting to provide early formal instruction in academic subjects. "Playing with other children, away from adults, is how children learn to make their own decisions, control their emotions and impulses, see from others' perspectives, negotiate differences with others, and make friends," according to Dr. Peter Gray, Boston College professor and an expert on the evolution of play and its vital role in child development. "In short, play is how children learn to take control of their lives."

All content from Kiddle encyclopedia articles (including the article images and facts) can be freely used under Attribution-ShareAlike license, unless stated otherwise. Cite this article:
Preschool Facts for Kids. Kiddle Encyclopedia.