Kids Encyclopedia Facts
This page is about the city. For the adjacent town, see Watertown (town), Wisconsin.

Watertown is the largest city in the Watertown-Fort Atkinson micropolitan area, which also includes Johnson Creek and Jefferson.

Watertown was first settled by Timothy Johnson, who built a cabin on the west side of the Rock River in 1836. He was born in Middleton, Middlesex County, Connecticut, on the 28th of June, 1792. A park on the west side of the city is named in his honor. The area was settled to utilize the power of the Rock River, which falls 20 feet (6.1 m) in two miles (two 10-foot (3.0 m) dams). In contrast, the Rock River falls only 34 feet (10 m) in 58 miles (93 km) upstream from Watertown. The water power was first used for sawmills, and later prompted the construction of two hydroelectric dams, one downtown (where the river flows south) and one on the eastern edge of the city (where the river flows north).

In the 1850s, German immigrants arrived in Watertown from Germany. These people were fleeing revolutions and turmoil in Germany, which often saw pogroms against the wealthy. It was deemed better to be poor or middle class in America than it was to be wealthy in Germany, as a result most of the German immigrants who arrived in Watertown brought with them the trappings of the German middle class, including a proclivity for classical music, the Latin language and ornate furniture. Unlike other instances in other parts of the country in which they faced discrimination and xenophobia, they were welcomed with open arms by the English-Puritan descended "Yankee" population of Watertown and Jefferson County as a whole. This warm reception led to chain migration, which in turn greatly increased the German population of the region. Culturally they had much in common with the New England derived population, for instance both groups unanimously opposed slavery and both had a pronounced love for commerce and industry. Economically both communities would thrive in Watertown for the entirety of the 19th century, not facing any measurable economic hardships until the Great Depression in the following century.

A canal from Milwaukee to the Watertown area was once planned, but was replaced by railroad before any work had been completed, other than a dam in Milwaukee. The territorial legislature incorporated the Milwaukee and Rock River Canal company in 1836, but the plan was abandoned in 1848. The canal would have provided a waterway between the Great Lakes and the Mississippi River, but even if completed, it may not have seen much success because railroads had already become the preferred mode of transportation.

In 1853, a plank road was completed from Milwaukee to Watertown. After plank roads were no longer used, the route was replaced by highway (Wisconsin Highway 16) and a railroad. A street named "Watertown Plank Road" survives in Milwaukee. It is referred to in the "Plank Road Brewery" family of beers, produced by Miller Brewing Company in Milwaukee. 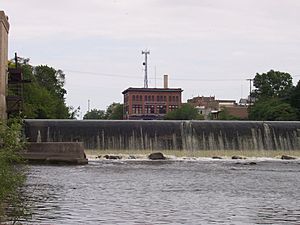 The downstream of Watertown's two dams, with a portion of downtown in the background 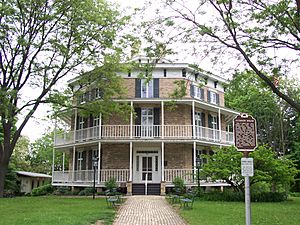 There was an influx of German immigrants in the late 19th century. The city is the home of the first kindergarten in the United States, started in 1856 by Margarethe Schurz, wife of statesman Carl Schurz; the building that housed this kindergarten is now located on the grounds of the Octagon House Museum in Watertown.

Growth of the city was substantially hampered when Watertown issued almost half a million dollars in bonds to support the building of two railroads to town to encourage further growth: the Chicago & Fond du Lac Company and the Milwaukee, Watertown & Madison Road. The success of the plank road convinced residents that a railroad would be even more beneficial, and bonds were issued from 1853 to 1855. The Milwaukee and Watertown Railroad, as it was called before it extended to Madison, was completed in 1855, only the second line in the state.

Soon after, the two railroads went bankrupt in the Panic of 1857. The bonds were sold by the original investors to out-of-town speculators at a small fraction of their face value. Since the railroads were never built and did not produce revenue, the city was unable to pay off the bonds. Moreover, the city did not feel compelled to do so because the creditors (those who held the bonds) were not only from out of town, but weren't even the original holders. Yet the creditors exerted so much pressure on the city to pay off the bonds that Watertown effectively dissolved its government so that there was no legal entity (the government as a whole or officers) that could be served a court order to pay or appear in court. The case was not resolved until 1889, when it had risen all the way to the Supreme Court of the United States, which essentially dismissed the case of the creditors. A small amount remained to be paid, and this was not paid off until 1905, half a century later.

The Rock River flows through Watertown in a horseshoe bend before heading south and west on its way to the Mississippi River. The city originally developed inside the horseshoe, though it has long since grown beyond. Silver Creek adjoins the river in the city, as does a short creek on the west side.

The most notable geographical feature is a high density of drumlins, long hills formed by the glaciers of the Wisconsin glaciation as they retreated northwards. Hills in the area are elongated in the north-south direction.

There were 9,187 households of which 33.0% had children under the age of 18 living with them, 50.0% were married couples living together, 10.5% had a female householder with no husband present, 4.8% had a male householder with no wife present, and 34.6% were non-families. 28.6% of all households were made up of individuals and 13.2% had someone living alone who was 65 years of age or older. The average household size was 2.46 and the average family size was 3.03.

There were 8,022 households out of which 34.9% had children under the age of 18 living with them, 56.2% were married couples living together, 9.5% had a female householder with no husband present, and 30.6% were non-families. 25.5% of all households were made up of individuals and 12.1% had someone living alone who was 65 years of age or older. The average household size was 2.55 and the average family size was 3.07.

Primary automobile transportation is provided via Highways 19, 26 and 16. Highway 19 begins in Watertown and runs westward. Highway 16 runs east-west across Wisconsin from Milwaukee to La Crosse, passing around Watertown via a bypass. Business highway 26 runs north-south through the center of the city, while highway 26 bypasses the town to the west. Highways 26 and 16 provide access to Interstate 94. Highway 16 provides access to the Milwaukee metro area, and highway 19 provides access to the Madison metro area.

Amtrak's Empire Builder passenger train passes through, but does not stop in, Watertown.

All content from Kiddle encyclopedia articles (including the article images and facts) can be freely used under Attribution-ShareAlike license, unless stated otherwise. Cite this article:
Watertown, Wisconsin Facts for Kids. Kiddle Encyclopedia.