Kids Encyclopedia Facts
This page is about the town in Scotland. For other uses, see Lanark (disambiguation).

Lanark ( Scottish Gaelic: Lannraig Scots: Lanrik) is a town in the central belt of Scotland. The name is believed to come from the Cumbric Lanerc meaning "clear space, glade".

Lanark was historically the county town of Lanarkshire, though in modern times this title belongs to Hamilton. Lanark railway station and coach station have frequent services to Glasgow. There is little industry in Lanark and some residents commute to work in Glasgow and Edinburgh. Its shops serve the local agricultural community and surrounding villages. There is a large modern livestock auction market on the outskirts of the town.

Lanark has served as an important market town since medieval times, and King David I made it a Royal Burgh in 1140, giving it certain mercantile privileges relating to government and taxation. King David I realised that greater prosperity could result from encouraging trade. He decided to create a chain of new towns across Scotland. These would be centres of Norman civilisation in a largely Celtic country, and would be established in such a way as to encourage the development of trade within their area. These new towns were to be known as Burghs. Bastides were established in France for much the same reason.

When a site had been selected for a new town the King’s surveyors would lay out an area for the town’s market. Each merchant who came to the town was granted a plot of land (usually rent free for the first few years) bordering on the marketplace. These plots were known as feus or rigs. Each feu in a burgh was the same size, though the size varied between burghs. In Forres in the north of Scotland each feu was 24 feet 10 inches (7.57 m) wide and 429 feet (131 m) deep. The layout of the feus in Lanark can still be easily seen between the north side of Lanark High Street (the former market place) and North Vennel, a lane which runs behind the feus. A motte and bailey castle was also constructed at the bottom of Castlegate.

The first aviation meeting to be held in Scotland was held at Lanark Racecourse between 6 and 13 August 1910. This location was chosen because the land was relatively flat, the racecourse already had facilities for a paying public, there were stables to act as hangars for the aeroplanes and the racecourse was accessible by both road and by rail, especially as The Caledonian Railway Company were prepared to construct a new station near the main entrance. The aeroplanes were transported to the meeting by rail, as aviation technology at the time was not advanced enough to safely fly there. The Lanark meeting took place shortly after a similar event in Bournemouth at which Charles Rolls lost his life. Influenced by this, it was decided that no aircraft would fly closer than 300 yards (270 m) away from the spectators. For the first time, aeroplanes were accurately timed over a straight measured distance, allowing the first world records to be set, covering flights over 1 mile (1.6 km). The meeting was described by The Aero magazine as 'the most successful yet held in Britain'.

A permanent military presence was established in the town with the completion of Winston Barracks in 1930. 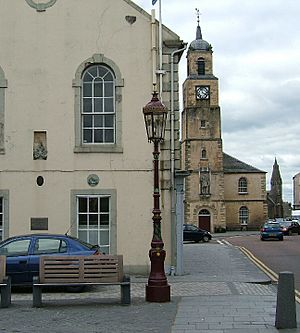 Visitors to the town can visit the nearby World Heritage Site of New Lanark, close to the Falls of Clyde, the Corehouse estate and the Scottish Wildlife Trust's Corehouse Nature Reserve.

The Lanark Museum is located in West Port, inside the YMCA building.

The town's Castlebank Park lies near the former site of Lanark Castle, and allows access to the River Clyde and the Clyde Walkway.

An ornate gas lamp, known as the 'Provost's Lamp' stands at the bottom of the high street. The lamp used to be placed outside the home of whoever was Provost of Lanark at the time. 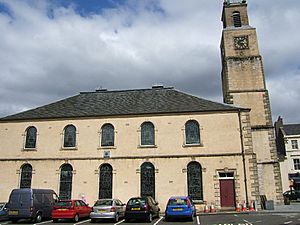 St. Nicolas' Parish Church stands at the bottom of the high street. The church bell is believed to date from 1110, and may be one of the oldest church bells in the world. It was moved from The Old Church of St Kentigern when St. Nicolas's Church was built in 1774. It has been recast four times, including 1659 and 1983. There is an 8-foot (2.45 m) statue of William Wallace in the steeple. This was sculpted by Robert Forrest, from an ancient drawing in the possession of the Society of Antiquaries. 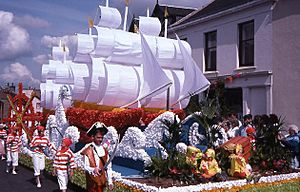 This historic background forms the basis for the Lanark Lanimers celebrations, which take place each year for one week in June. Local primary schoolchildren elect a Lanark Lanimer Queen and court; and a Lord Cornet is chosen from local businessmen. On the Monday night the Perambulation of the Marches takes place, when townspeople turn out to walk around half the town boundary, following the Lord Cornets past and present as they inspect the border-stones. Traditionally, the townspeople carry "birks", which are small branches of birch trees cut from the woods at the Glenburnie estate. This tradition was started in 1948 by Joseph Doolan, whose family owned the land. The other half of the boundary is inspected on the Wednesday night, again led by the Lord Cornet accompanied by many local riders who participate in the Riding of the Marches, locally referred to as the Rideout. On the Thursday morning, schools and other organisations parade before the Lanark Lanimer Queen in themed dress, accompanied by pipe bands. The best floats win prizes, and after the parade the crowning of the Queen takes place on a temporary stand erected in front of St Nicholas' Church, under the statue of William Wallace. The Queen holds a reception party in the town's Memorial Hall on the Thursday and Friday nights, where children perform songs and dances.

Pipe Bands: Lanark & District Pipe Band previously had two units which competed in competitions run by the Royal Scottish Pipe Band Association - one competing in grade 4b and one in grade 3a, having been upgraded from 4b to 4a to 3b to 3a in consecutive years from 2004. In the 1980s, the band competed as high as grade 2 and as of 2011, the band is thriving in numbers and competes in Grade 4b.

The 'Music in Lanark' programme began in 2000 with the aim of bringing a variety of the highest quality live music to the town. In the first five years there were three classical concerts, one jazz concert and one traditional (Scottish) music concert. The programme continues to grow.

As with the rest of the British Isles and Scotland, Lanark experiences a maritime climate with cool summers and mild winters. In terms of the local climate profile, Lanark's inland, rural, river valley setting means frost is very common, having been recorded in all months. Typically almost 100 nights will report a frost per year, and even in a statistically average year the temperature should fall to as low as −14.3 °C (6.3 °F) on the coldest night.

William Wallace is one of the most notable people in Lanark's history. A key leader in the Scottish Wars of Independence, he is known to have first "drawn his sword to free his native land" in Lanark in 1297, killing the English sheriff Haselrig. First year pupils at Lanark Grammar School study Wallace and the Wars of Independence in detail. An 8-foot statue of Wallace sits on St Nicholas Church at the town cross dating back to 1817 which was sculpted by Carluke man Robert Forrest.

Other important figures in Lanark history include:

The following buildings remain in Lanark, but are no longer used for religious purposes:

Finally, these buildings no longer exist:

All content from Kiddle encyclopedia articles (including the article images and facts) can be freely used under Attribution-ShareAlike license, unless stated otherwise. Cite this article:
Lanark Facts for Kids. Kiddle Encyclopedia.