William Wallace was a Scottish knight who fought the King of England (Edward I) in the Middle Ages. He was born in c.1272, and executed by the English on 23 August 1305. Scotland had been claimed by Edward, and Wallace refused allegiance to Edward.

Wallace was probably born around 1270-1272. Little is known about his birth or childhood. Exactly where and when Wallace was born is not very clear. Some people say he was born about 1272, but a book printed in the 16th century called History of William Wallace and Scottish Affairs says he was born in 1276. Tradition says he was born in Elderslie, near Paisley in Renfrewshire. There are links with Ayrshire as well, and it is not clear whether Wallace first fought the English in Ayrshire or Lanark. Tradition sees Wallace as a being a 'commoner', or normal person. Robert the Bruce, who also fought the English, was seen as being more noble. But this is not strictly true because Wallace's family were minor nobles.

King Edward offered Scotland a deal which allowed them to have a Scottish king so long as King Edward was still in charge. This required the Scottish nobles to kneel, and swear allegiance to his sovereignty. Wallace refused, and led the resistance which followed. A series of battles were fought:

Wallace evaded capture by the English until 5 August 1305 when John de Menteith, a Scottish knight loyal to Edward, turned Wallace over to English soldiers at Robroyston near Glasgow. Wallace was taken to London at Westminster Hall, where he was tried for treason. He replied to the charge, "I could not be a traitor to Edward, for I was never his subject". Wallace was however found guilty. 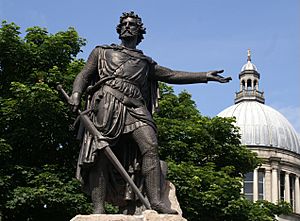 All content from Kiddle encyclopedia articles (including the article images and facts) can be freely used under Attribution-ShareAlike license, unless stated otherwise. Cite this article:
William Wallace Facts for Kids. Kiddle Encyclopedia.