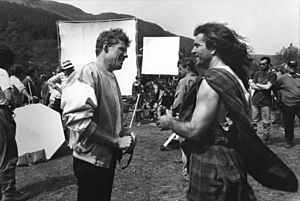 Braveheart is an American historical war drama movie starring Mel Gibson. It is loosely based around the life of 13th century Scottish warrior William Wallace, who fought against the English when they occupied Scotland.

All content from Kiddle encyclopedia articles (including the article images and facts) can be freely used under Attribution-ShareAlike license, unless stated otherwise. Cite this article:
Braveheart Facts for Kids. Kiddle Encyclopedia.