The Battle of Stirling Bridge (Scottish Gaelic: Blàr Drochaid Shruighlea) was a battle of the First War of Scottish Independence. On 11 September 1297, the forces of Andrew Moray and William Wallace defeated the combined English forces of John de Warenne, 6th Earl of Surrey, and Hugh de Cressingham near Stirling, on the River Forth.

In 1296, John de Warenne, 6th Earl of Surrey, defeated John Comyn, Earl of Buchan in the Battle of Dunbar. King John Balliol surrendered to King Edward I of England at Brechin on 10 July, and the Scottish landholders were made to acknowledge Edward's overlordship. In 1297, Moray initiated a revolt in northern Scotland and by the late summer, controlled Urquhart, Inverness, Elgin, Banff and Aberdeen. Wallace joined Moray in September near Dundee, and they marched to Stirling. Stirling, in the words of Stuart Reid, was "traditionally regarded as the key to Scotland." Meanwhile, Surrey had joined Cressingham in July and both had arrived at Stirling by 9 September 1297. By then, Moray and Wallace had already occupied Abbey Craig.

Surrey was concerned with the number of Scots he faced, separated by a long causeway and narrow, wooden bridge, over the River Forth near Stirling Castle. Determining that he would be at a tactical disadvantage if he attempted to take his main force across there, he delayed crossing for several days to allow for negotiations and to reconnoiter the area. On 11 September, Surrey had sent James Stewart, and then two Dominican friars as emissaries to the Scots. According to Walter of Guisborough, Wallace reputedly responded with, "We are not here to make peace but to do battle to defend ourselves and liberate our kingdom. Let them come on and we shall prove this to their very beards."

Camped on Abbey Craig, the Scots dominated the soft flat ground north of the river. The English force of English, Welsh and Scots knights, bowmen and foot soldiers camped south of the river. Sir Richard Lundie, a Scots knight who joined the English after the Capitulation of Irvine, offered to outflank the enemy by leading a cavalry force over a ford two miles upstream, where sixty horsemen could cross at the same time. Hugh de Cressingham, King Edward's treasurer in Scotland, persuaded the Earl to reject that advice and order a direct attack across the bridge.

The small bridge was broad enough to let only two horsemen cross abreast but offered the safest river crossing, as the Forth widened to the east and the marshland of Flanders Moss lay to the west. The Scots waited as the English knights and infantry, led by Cressingham, with Sir Marmaduke de Thweng and Sir Richard Waldegrave, began to make their slow progress across the bridge on the morning of 11 September. It would have taken several hours for the entire English army to cross.

Wallace and Moray waited, according to the Chronicle of Hemingburgh, until "as many of the enemy had come over as they believed they could overcome". When a substantial number of the troops had crossed (possibly about 2,000) the attack was ordered. The Scots spearmen came down from the high ground in rapid advance and fended off a charge by the English heavy cavalry and then counterattacked the English infantry. They gained control of the east side of the bridge and cut off the chance of English reinforcements to cross. Caught on the low ground in the loop of the river with no chance of relief or of retreat, most of the outnumbered English on the east side were probably killed. A few hundred may have escaped by swimming across the river. Marmaduke Thweng managed to fight his way back across the bridge with some of his men. 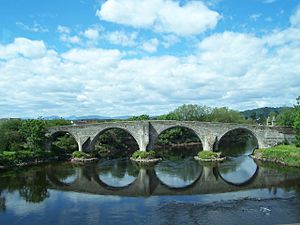 Surrey, who was left with a small contingent of archers, had stayed south of the river and was still in a strong position. The bulk of his army remained intact and he could have held the line of the Forth, denying the Scots a passage to the south, but his confidence was gone. After the escape of Sir Marmaduke Thweng, Surrey ordered the bridge to be destroyed, retreated towards Berwick, leaving the garrison at Stirling Castle isolated and abandoning the Lowlands to the rebels. James Stewart, the High Steward of Scotland, and Malcolm, Earl of Lennox, whose forces had been part of Surrey's army, observing the carnage to the north of the bridge, withdrew. Then, the English supply train was attacked at The Pows, a wooded marshy area, by James Stewart and the other Scots lords, killing many of the fleeing soldiers.

The Stirling Bridge of that time is believed to have been about 180 yards upstream from the 15th-century stone bridge that now crosses the river. Four stone piers have been found underwater just north (56°07′45″N 3°56′12″W﻿ / ﻿56.1290916°N 3.936764°W﻿ / 56.1290916; -3.936764) and at an angle to the extant 15th-century bridge, along with man-made stonework on one bank in line with the piers. The site of the fighting was along either side of an earthen causeway leading from the Abbey Craig, atop which the Wallace Monument is now, to the north end of the bridge. The battlefield has been inventoried and protected by Historic Scotland under the Scottish Historical Environment Policy of 2009. 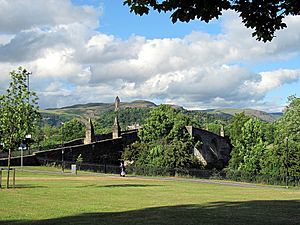 The contemporary English chronicler Walter of Guisborough recorded the English losses in the battle as 100 cavalry and 5,000 infantry killed. Scottish casualties in the battle are unrecorded, with the exception of Andrew Moray, who was mortally wounded during the battle, and was dead by November.

The Lanercost Chronicle records that Wallace had a broad strip of Cressingham's skin, "...taken from the head to the heel, to make therewith a baldrick for his sword."

The Scots proceeded to raid the south as far as Durham, England. Wallace was appointed "Guardian of the kingdom of Scotland and commander of its army." Yet, Edward was already planning another invasion of Scotland, which would lead to the Battle of Falkirk.

All content from Kiddle encyclopedia articles (including the article images and facts) can be freely used under Attribution-ShareAlike license, unless stated otherwise. Cite this article:
Battle of Stirling Bridge Facts for Kids. Kiddle Encyclopedia.