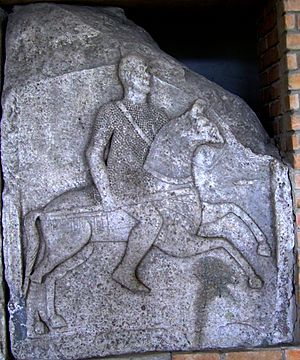 A cavalryman wearing a mail shirt with a baldric over his right shoulder, from the Roman Tropaeum Traiani, built 109 AD in the area of present-day Romania.

A baldric (also baldrick, bawdrick, bauldrick as well as other rare or obsolete variations) is a belt worn over one shoulder that is typically used to carry a weapon (usually a sword) or other implement such as a bugle or drum. The word may also refer to any belt in general, but this usage is poetic or archaic. In modern contexts, military drum majors usually wear a baldric.

All content from Kiddle encyclopedia articles (including the article images and facts) can be freely used under Attribution-ShareAlike license, unless stated otherwise. Cite this article:
Baldric Facts for Kids. Kiddle Encyclopedia.