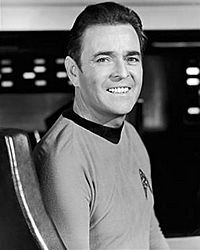 Scotty as he appears in Star Trek.

Montgomery Scott is a fictional character in the television and movie franchise Star Trek. He one of the navigators of the Starship Enterprise. Scotty is played by actor James Doohan and by Simon Pegg.

All content from Kiddle encyclopedia articles (including the article images and facts) can be freely used under Attribution-ShareAlike license, unless stated otherwise. Cite this article:
Montgomery Scott Facts for Kids. Kiddle Encyclopedia.