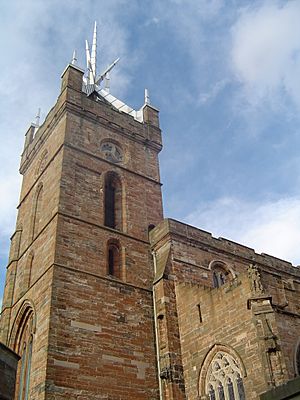 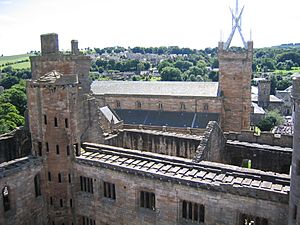 Linlithgow town in the background, St. Michael's Church in the mid-ground and the Palace in the foreground

St. Michael's Parish Church is one of the largest burgh churches in the Church of Scotland. It is one of two parishes serving the West Lothian county town of Linlithgow, the other being St. Ninian's Craigmailen. St Michael is the town's patron saint; the town's motto is "St Michael is kinde to strangers".

King David I of Scotland granted a charter for the establishment of the church in 1138. The church was built on the site of an older church and was consecrated in 1242. Following a fire in 1424, most of the present building dates from the mid 15th century, with extensive restorations in the 19th century. Parts of the Church of St Michael were brought into use as they were completed, and the church was completed in 1540.

Built immediately to the south of Linlithgow Palace, the church was much favoured as a place of worship by Scottish Kings and Queens. Mary, Queen of Scots, was born in Linlithgow Palace on 8 December 1542 and was baptised in St Michael’s Church.

In 1559, at an early stage of the Scottish Reformation, the Protestant Lords of the Congregation destroyed the statues adorning the exterior and interior of the church as signs of "popishness", and defaced the statue of St Michael which formed part of the structure.

Following the Reformation, the interior of the church was reordered. Some traces of pre-Reformation artefacts can still be detected. In 1646, Oliver Cromwell's troops stabled their horses within the nave. Following the departure of the troops, considerable restoration was required.

By the early 19th century the church was in a very poor physical condition. Although repairs were made, many of the historic features of the church were destroyed, the interior walls were whitewashed, a plaster ceiling replaced a fine 16th-century one and in 1821 the stone Crown Tower (a crown steeple similar to that of St Giles' Cathedral) had to be dismantled. Rev Archibald Scott introduced the first church organ in 1871 (following the "Crieff Organ Case" of 1867), and also removed the whitewash from the walls.

While other repairs were completed and the church was rededicated in 1896, the tower was too weakened for restoration of the original crown steeple.

By the late 19th century tastes had changed radically, with the installation of the church's first post-Reformation stained glass windows. In 1964, an aluminium crown was installed (replacing the Crown Tower removed in 1821).

The church has been served by some notable former ministers, including the Very Revd Dr David Steel (father of the politician David Steel) who was Moderator of the General Assembly of the Church of Scotland in 1974. Rev Dr Liam Fraser was inducted as St Michael's Minister on 14 November 2019.

All content from Kiddle encyclopedia articles (including the article images and facts) can be freely used under Attribution-ShareAlike license, unless stated otherwise. Cite this article:
St Michael's Parish Church, Linlithgow Facts for Kids. Kiddle Encyclopedia.