Kids Encyclopedia Facts
In this article, the given name is Enkhbayar. Nambar is a patronymic, not a family name. 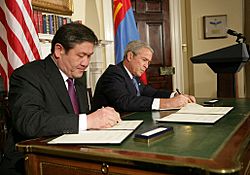 Nambaryn Enkhbayar was born on 1 June 1958 in Ulaanbaatar, Mongolia. He finished a secondary school in 1975, and earned an undergraduate degree majoring in literature and language studies from Maxim Gorky Literature Institute in Moscow, Russia in 1980. He studied at an English language and literature course at Leeds University in the United Kingdom in 1985–1986. As a young man, he translated the works of Mongolian poet Mend-Ooyo Gombojav into English. Enkhbayar became the chairman of the Association of Mongolian Writers in 1990. He is married to Onongiin Tsolmon since 1987 and they have four children.

In 1992, as a member of the Mongolian People's Revolutionary Party (MPRP) Enkhbayar was elected to the State Great Khural (Mongolian Parliament). Mongolia voted to retain former communist MPRP during its first venture into democratic elections, and Enkhbayar was appointed to serve as the country's Minister of Culture. He held that post until 1996, when the Democratic Party ousted the MPRP in the parliamentary elections that year. In 1996 Enkhbayar became the secretary general of the MPRP and led the opposition MPRP group in the Parliament. In 1997 he was elected as the chairman of the MPRP.

In 1999, the country was hit by one of its infamous zud spells, when summer draught and cold weather blizzards resulted in severe food shortages and loss of thousands of livestock. The government responded poorly to the disaster and the MPRP received an unexpected boost from the climatological disaster. Enkhbayar's leading MPRP won 2000 parliamentary elections winning 72 out of 76 seats. The MPRP controlling the parliament, Enkhbayar became the country's Prime Minister. He initiated an ambitious Millennium Road project to connect Mongolian territory from east to west. During Enkhbayar's time as Prime Minister, he successfully eliminated Mongolia's debt to the former Soviet Union, and this was the first time since the 1920s that Mongolia did not owe debt to its northern neighbor, while it was controversial debt due to Mongolia being a raw material supplier to Soviet Union pricing the materials almost free for former USSR. Thanks to international exposure of Mongolia's vast mineral resources, the economy experienced 10% real GDP growth in 2004.

In 2004, MPRP lost to Motherland Democratic Coalition-a coalition of Democratic Party and Motherland Party. Due to election result where none of the coalition and the MPRP became the enough majority to hold the government, grand coalition government was formed and Enkhbayar became the Speaker of the Parliament and served on this post in 2004–2005.

He won the 2005 presidential election and became the Mongolian President. He welcomed U.S. President George W. Bush who paid an official visit to Mongolia. It was the first visit of a U.S president to the country. Mongolia received US$285 million aid from the United States' Millennium Challenge Compact (MCC) which United States President George W. Bush signed with Enkhbayar in 2007.

Over 1000 members of Mongolian People's Revolutionary Party and Enkhbayar's supporters participated in Mongolian People's Revolutionary Party's organized demonstration demanding Enkhbayar's release on the same day of his arrest. On 4 May 2012, Enkhbayar announced a dry hunger strike demanding his release. He lost around 12 kilograms in 16 days. Amnesty International issued a statement demanding the Mongolian authority to respect human rights of Enkhbayar compatible to international standards. United Nations Secretary General Ban Ki Moon made a phone call to President Tsakhiagiin Elbegdorj expressing concern over Enkhbayar's health. Enkhbayar was released on bail on 14 May 2012. United States Senator Dianne Feinstein expressed to the U.S.Senate her pleasure for Enkhbayar's release on bail and said "For any democracy, due process and the rule of law are essential."

On 8 June 2012, the General Elections Committee (GEC) refused to register Enkhbayar as a candidate for the 2012 parliamentary elections in the MPRP party list listed as number one. It stated that the official documents sent from the Prosecutor's Office and Sukhbaatar District Court of Ulaanbaatar required the rejection of Enkhbayar's application pending the case. However, Enkhbayar and his lawyers argue that the incumbent president, Tsakhiagiin Elbegdorj, who took office in 2009, engineered the corruption case to keep him from running in the coming elections. They claim that the court gave them insufficient time to review the prosecutors' evidence and witness statements. The election authorities' denial of Enkhbayar's candidacy on 6 June, they say, violates his constitutional right to be considered innocent until proven guilty. According to a US-based independent trial observer, the five charges leveled against Enkhbayar seem overblown and unsubstantiated. One accuses him of misappropriating TV equipment that was intended for a Buddhist monastery. Another alleges that he illegally shipped eight copies of his autobiography to South Korea on a government plane.

On 2 August 2012, after a three-day trial Sukhbaatar District Court convicted Enkhbayar of corruption and sentenced to seven years of imprisonment, three of which was pardoned and then gave four years prison term and fined with over MNT 1.7 billion for misusing state properties and government power. Enkhbayar's sentence was reduced to two and a half year prison term without the fine by the Supreme Court of Mongolia-the highest court in Mongolia.

On 1 August 2013, President of Mongolia Tsakhiagiin Elbegdorj issued a decree to pardon Enkhbayar thus releasing him from the rest of his jail term effective on the decree date.

Enkhbayar climbed the highest peak in Mongolia, Khüiten Peak, with mountaineers of the Mongolian Mountaineering Federation and the Nepal Mountaineering Association on 23 June 2011.

Enkhbayar is a follower of Tibetan Buddhism. He translated several Buddhist texts into Mongolian.

All content from Kiddle encyclopedia articles (including the article images and facts) can be freely used under Attribution-ShareAlike license, unless stated otherwise. Cite this article:
Nambaryn Enkhbayar Facts for Kids. Kiddle Encyclopedia.