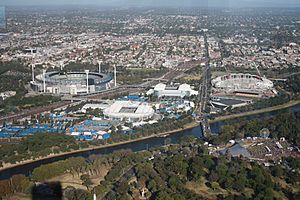 Aerial view of the Melbourne Sports and Entertainment Precinct

It is considered to be Australia's "premier sports precinct" and regularly hosts some of the biggest domestic and international sporting events, including the AFL Grand Final (Australian rules football), Australian Open (tennis) and Boxing Day Test (cricket). The venues have also previously hosted the 1956 Summer Olympics (for which the Precinct served as the Olympic Park) and 2006 Commonwealth Games.

The precinct is located adjacent to both the Richmond and Jolimont railway stations; every train servicing the eastern side of Melbourne passes through one of these two stations. The precinct is also serviced by three tram routes from the city centre. Three footbridges are provided to cross the railway lines which divide the northern and southern halves of the precinct. The area in Yarra Park surrounding the Melbourne Cricket Ground is made available for ticketed car parking during major events in the precinct; free parking in the surrounding streets is available but limited.

All content from Kiddle encyclopedia articles (including the article images and facts) can be freely used under Attribution-ShareAlike license, unless stated otherwise. Cite this article:
Melbourne Sports and Entertainment Precinct Facts for Kids. Kiddle Encyclopedia.