East Grinstead is a town and civil parish in the northeastern corner of Mid Sussex district of West Sussex in England near the East Sussex, Surrey, and Kent borders. It lies 27 miles (43 km) south of London, 21 miles (34 km) north northeast of Brighton, and 38 miles (61 km) east northeast of the county town of Chichester. The civil parish covers an area of 2,443.45 hectares (6,037.9 acres) and had a population of 23,942 persons in the 2001 census. The population of the town at the 2011 Census was 26,383. Nearby towns include Crawley and Horley to the west, Tunbridge Wells to the east and Redhill and Reigate to the northwest. The town is contiguous with the village of Felbridge to the northwest. Until 1974 East Grinstead was the centre for local government - East Grinstead Urban District Council - and was located in the county of East Sussex. East Grinstead, along with Haywards Heath and Burgess Hill, as part of the former Cuckfield Rural District Council, came together as Mid-Sussex; moving to the jurisdiction of West Sussex County Council. The town has many historic buildings and is located on the Greenwich Meridian. It is located in the Weald and Ashdown Forest lies to the south-east of the town. 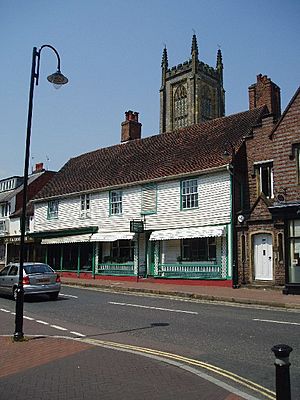 Houses and shops in East Grinstead

The High Street contains one of the longest continuous runs of 14th-century timber-framed buildings in England. Other notable buildings in the town include Sackville College, the sandstone almshouse built in 1609 where the Christmas carol "Good King Wenceslas" was written by John Mason Neale. The college has sweeping views towards Ashdown Forest. The adjacent St Swithun's Church, stands on the highest ground in the town and was rebuilt in the eighteenth century (the tower dating from 1789) to a perpendicular design by James Wyatt; its imposing building dominates the surrounding countryside for many miles around. In the churchyard are commemorated the East Grinstead Martyrs; and in the south-east corner is the grave of John Mason Neale. The Greenwich Meridian runs through the grounds of the historic 1769 East Court mansion, home of the Town Council, giving the visitor an opportunity to stand with a foot in both the east and west. The mansion stands in a parkland setting. In 1968 the East Grinstead Society was founded as an independent body both to protect the historically important buildings of East Grinstead (and its environs) and to improve the amenities for future generations.

On the outskirts of the town is Standen, a country house belonging to the National Trust, containing one of the best collections of arts and crafts movement furnishings and fabrics. Off the A264 to Tunbridge Wells, there is a 1792 historic house called Hammerwood Park (the first work of the future architect of the United States Capitol) which is open to the public twice a week in summer. East Grinstead House is the headquarters of the (UK and Ireland) Caravan Club.

Local attractions include Ashdown Forest (where the Winnie-the-Pooh stories are set) and the Bluebell Railway, a preserved heritage line with steam locomotives. The town is also the site of Queen Victoria Hospital, where famed plastic surgeon Archibald McIndoe treated burns victims of World War II and formed the Guinea Pig Club. A statue of Sir Archibald McIndoe caring for an injured airman was erected in June 2014 outside Sackville College and was unveiled by HRH The Princess Anne, the Princess Royal. The town is well located to visit Chartwell the country home of Sir Winston Churchill, Hever Castle home of Henry VIII's second wife Anne Boleyn, and Penshurst Place home of the Sidney family. Kidbrooke Park (today Michael Hall School), a home of the Hambro family, was restored by the noted Sussex architect and antiquarian, Walter Godfrey, as was Plawhatch Hall.

During the Second World War, the town became a secondary target for German bombers which failed to make their primary target elsewhere. On the afternoon of Friday 9 July 1943, a Luftwaffe bomber became separated from its squadron, followed the main railway line and circled the town twice, then dropped seven bombs. Two bombs, one with a delayed-action fuse, fell on the Whitehall Theatre, a cinema on the London Road, where 184 people at the matinée show were watching a Hopalong Cassidy film before the main feature. A total of 108 people were killed in the raid, including children in the cinema, many of whom were evacuees; and some twenty Canadian servicemen stationed locally, who were either in the cinema when it was hit, or arrived minutes later to help with rescuing survivors. This was the largest loss of life of any single air raid in Sussex.

In 2006, the East Grinstead Town Museum was moved to new custom-built premises in the historic centre of the town, and successfully re-opened to the public. The Chequer Mead Community Arts Centre includes a modern 349-seat purpose-built theatre, which stages professional and amateur plays and music (local rock groups to chamber music orchestras), opera, ballet, folk music, tribute bands, and talks. The centre has a large art gallery for temporary exhibitions.

In addition to the nearby Ashdown Forest, East Grinstead is served by the Forest Way and Worth Way linear Country Parks which follow the disused railway line from Three Bridges all the way through to Groombridge and which are part of the Sustrans national cycle network. To the south of the town lies the Weir Wood Reservoir which offers sailing and a nature reserve which attracts an interesting assortment of birdlife. It is designated a Site of Special Scientific Interest.

In 1863, the then cottage hospital, Queen Victoria Hospital, was built on its current site in the 1930s. During the World War II the hospital was developed as a specialist burns unit by Sir Archibald McIndoe. It became world-famous for pioneering treatment of RAF and allied aircrew who were badly burned or crushed and required reconstructive plastic surgery. Most famously, it was where the Guinea Pig Club was formed in 1941, as a club which then became a support network for the aircrew and their family members. The club still provides assistance for Guinea Pigs, and meets regularly in East Grinstead. The Duke of Edinburgh is the current President of the club. Queen Victoria Hospital remains at the forefront of specialist care today, and is renowned for its burns treatment facilities and expertise throughout England.

During the War, a German bombing run had targeted the town and a bomb hit the Whitehall Cinema where the city’s school children were watching a film, killing 108 and injuring 235. The town was devastated; almost everyone in the town knew someone who lost or had a child injured. As such, the townspeople became very supportive of the patients at the Queen Victoria Hospital. Even though many of the victims were horribly disfigured (often missing limbs, and in the worst cases faces, their faces made up of burn tissue), the townspeople would go out of their way to make the men feel normal. Families invited the men to dinner, and girls asked them to go on dates. Patients of the burn units remember, and cherish, the charity received from the townspeople of East Grinstead.

In the winter of 2010, Claque Theatre produced the East Grinstead Community Play, which focussed on the bombing of the town in 1943, the work of Archibald McIndoe and his team at the hospital and on the Guinea Pig Club and its members. It was performed by local residents. On 9 June 2014 HRH The Princess Royal unveiled a statue to Sir Archibald McIndoe and the Guinea pigs. The Statue stands in front of Sackville College on the east end of the High Street. The Statue was funded by a public appeal and was sculpted by Martin Jennings. It depicts a burned airman looking to the sky, Sir Archibald is placing reassuring hands on his shoulders. The stone ring around the statue is for visitors to sit and reflect and in doing so become part of the story representing "The Town that did not stare". 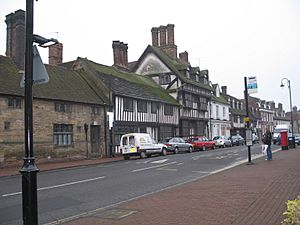 The East Grinstead Town Centre Master Plan was adopted on 10 July 2006 as a Supplementary Planning Document (SPD). The scheme proposed regeneration of the town centre in association with Thornfield Properties PLC. Thornfield Properties had submitted plans to the council for the start of an ambitious development of the Queens Walk and West Street area. It was expected that other redevelopment companies would fulfil targets outlined in the SPD over the next 20 years. 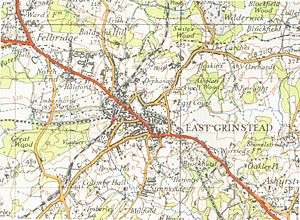 Gatwick Airport is 10 miles (16 km) from the town, whilst Redhill Aerodrome and Biggin Hill Airport are both within half an hour's drive. Hammerwood Park has a helicopter landing site for visiting pilots (3.5 miles (5.6 km) from the town).

East Grinstead has been a railway terminus since 1967, after the line from Three Bridges, to Royal Tunbridge Wells was closed under the Beeching Axe, a rationalisation of British Railways' branch lines based on a report by Dr Richard Beeching, a resident of the town at that time. (See also East Grinstead railway station for history of rail lines). The closure of the line to Lewes, part of the Bluebell Railway, occurred in 1958.

In the late 1970s the town's inner relief road was built along a section of one of the closed railway lines and is named "Beeching Way". It is rumoured that this road, which runs through a cutting, was intended to be called "Beeching Cut", but that the name was altered at the last minute in the interests of formality. Much of rest of the trackbed of the disused Three Bridges to Groombridge line now forms the route of the Worth Way and Forest Way, linear Country Parks allowing access to the Wealden countryside.

The Imberhorne Viaduct carrying the Bluebell Railway in East Grinstead

A part of the Lewes line was re-constructed by the Bluebell Railway, a nearby preserved standard gauge railway. The extension work was carried out in stages. The first paid-passenger service departed from East Grinstead station at 9:45 on Saturday 23 March 2013, and the first train left Sheffield Park for East Grinstead at 9:30 a.m. with services running each way every 45 minutes thereafter.

The town lies on the junction of the A22 and A264 roads. For just over one mile (1.6 km), from just to the north of the Town Centre to Felbridge village in Surrey, the two routes use the same stretch of single carriageway road. This is one of the principal causes of traffic congestion in the town.

The town is within commuting distance of London (about 30 miles (50 km)) and Crawley/Gatwick (about 10 miles (16 km)) by road. According to the 2001 Census, one in eight residents commuted to Crawley and Gatwick Airport for work with over 98% travelling by car.

East Grinstead is twinned with:

There are some Sites of Special Scientific Interest within the parish. Stone Hill Rocks are 8-metre-tall (26 ft) sandstone crags in the south of the Parish. They are of interest as they reveal a three dimension picture of the sedimentary make up of the surrounding geology.

The Chequer Mead Community Arts Centre was built in the 1990s and is home to the East Grinstead Music & Arts Festival which exists to encourage and promote dancing, singing and speech and drama in Sussex and neighbouring counties. The Hon. Vice-President of the Festival is former ballerina Beryl Grey. Local groups include the East Grinstead Concert Band (which also performs as the Band of the Bluebell Railway), the East Grinstead Choral Society and the East Grinstead Operatic Society.

All content from Kiddle encyclopedia articles (including the article images and facts) can be freely used under Attribution-ShareAlike license, unless stated otherwise. Cite this article:
East Grinstead Facts for Kids. Kiddle Encyclopedia.