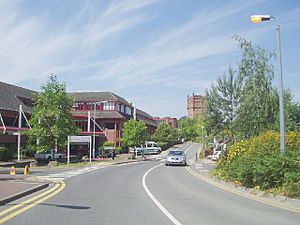 Haywards Heath is a town in West Sussex, England, 36 miles (58 km) south of London, 14 miles (23 km) north of Brighton, 13 miles (21 km) south of Gatwick Airport and 31 miles (50 km) northeast of the county town, Chichester. Nearby towns include Burgess Hill to the southwest, Horsham to the northwest, Crawley northwest and East Grinstead northeast. With only a relatively small number of jobs available in the immediate vicinity, mostly in the agricultural or service sector, many residents commute daily via road or rail to London, Brighton, Crawley or Gatwick Airport for work.

The name Hayward comes from Old English meaning an official who protected hedged enclosures from wandering livestock. There is a local legend that the name comes from a highwayman who went under the name of Jack Hayward.

Haywards Heath gets a mention in English Civil War records. Early in December 1642 the High Sheriff of Sussex (Sir Edward Ford) advanced with Royalist troops towards Lewes in East Sussex from Chichester in West Sussex. He was intercepted in Haywards Heath by local Parliamentarians and defeated. Haywards Heath as a settlement is a relatively modern development. Following the arrival of the London & Brighton Railway in 1841, its size has increased considerably. Haywards Heath railway station opened on 12 July 1841 and served as the southern terminus of the line until the completion of Brighton station on 21 September. The position of Haywards Heath, and its place on both this railway and near the main road (A23) between London and Brighton, enables it to function as a commuter town, with many residents working in London, Brighton, Crawley and Gatwick Airport. 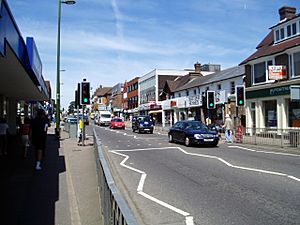 Other noted historical events in the town's history include:

In the 1960s and 1970s, two light industrial estates were built. Office development has lately resulted in the town being a regional or national centre for a number of national companies and government agencies.

The parish church, dedicated to St Wilfrid, and the Roman Catholic church of St Paul are among the churches and chapels in Haywards Heath. Other places of worship include the Methodist church in Perrymount Road and two Baptist churches, St Richards (C of E), the Church of the Presentation (C of E) and the Ascension Church (C of E).

The Priory of Our Lady of Good Counsel on Franklynn Road was built in 1886 and is Grade II listed. In 1978 it was converted to a restaurant and offices. 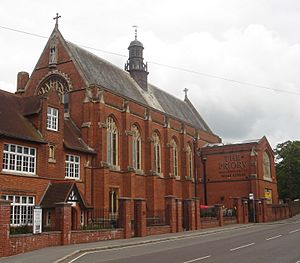 Haywards Heath was in East Sussex, but a change to the county boundary in 1974 brought it under the jurisdiction of West Sussex.

Housing in Haywards Heath has been expanded significantly in the last ten years due to the creation of Bolnore Village, located to the south west of the existing town. Planning permission was first granted in the late 1990s for 780 new homes on a greenfield site. The first house was completed in October 2002. Since then, phases 1, 2 and 3 have been built by the house builders Crest Nicholson in conjunction with several other developers. Housing was followed by the construction of various commercial units—currently occupied by the Co-operative Supermarket and the country's first self-governing parent-promoted primary school in September 2010. A pavilion and recreation ground will follow in 2013. Construction of the final phases of Bolnore village (phases 4 and 5) commenced in 2011 (located closer to Haywards Heath centre) with the first houses occupied in September 2012.

The decision to grant planning permission for Bolnore Village was somewhat controversial, since the Ashenground and Catts Woods on that site formed a Site of Nature Conservation Interest (SNCI).

As a condition for planning permission, the developers are required to build a relief road for the town, often referred to as Haywards Heath by-pass, which has re-routed the A272 to the south side of the town. Construction work on the relief road commenced in 2012, with it being completed in August 2014, the previous A272 route through Haywards Heath has been renamed to the B2272.

In 2008, local residents won a bid to set up and run their own primary school for the village. The new school opened in September 2008.

The Mid Sussex District Council is planning to further modernise the town centre, and has published a Haywards Heath Masterplan which includes renovation plans for the railway station ticket office and new shared parking facilities. The next steps for the redevelopment are currently unclear since the council's chosen developer, Thornfield Properties, went into administration in early 2010. However, the council remains committed to achieving the redevelopment through alternative developers. 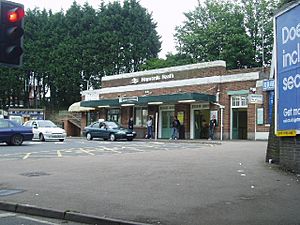 Haywards Heath is primarily served by the A272 road, which runs around the south side of the town. This is the new Haywards Heath by-pass, which was opened (ahead of schedule) in August 2014. It diverts town centre traffic south of the town, just south of Bolnore Village, Ashenground and the Princess Royal Hospital. The old A272 through the town centre is now the B2272. Following the A272 to the west, it joins the A23 road which runs both to Brighton to the south and London to the north. 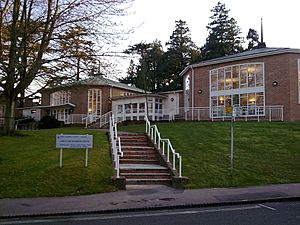 The library in Haywards Heath

Haywards Heath is twinned with:

A major road in the Bolnore Village area of the town has been named Traunstein Way and there is a German postbox outside the Town Hall to commemorate the link.

The area has two hockey clubs nearby: St Francis Hockey Club and Mid Sussex Hockey Club. They both play their home games at The Triangle leisure centre in Burgess Hill, and have a shared clubhouse based in Haywards Heath.

Oathall Community College is a secondary school for the town and surrounding area. Facilities include a school farm. There are also several primary schools, for example St Joseph's.

There is also a new Chichester College campus opening September 2020, which will be called Haywards Heath College. The college will use the old Central Sussex College Haywards Heath campus on Harlands Road which closed in Summer 2017. The new principal will be the current Worthing College principal.

Haywards Heath is also home to a number of local primary schools, one of which is St Joseph's Catholic Primary School, located on Hazelgrove Road near the centre of the town.

All content from Kiddle encyclopedia articles (including the article images and facts) can be freely used under Attribution-ShareAlike license, unless stated otherwise. Cite this article:
Haywards Heath Facts for Kids. Kiddle Encyclopedia.