Kids Encyclopedia Facts
This page is about the town in Surrey. For the village in Oxfordshire, see Horley, Oxfordshire.

Horley is a town in Surrey on the border of Surrey and West Sussex, England, south of the twin towns of Reigate and Redhill, and neighbouring Gatwick Airport and in turn Crawley. With fast links by train round-the-clock to London from Horley railway station, it qualifies as a commuter town and has a significant economy of its own, including business parks and a relatively long high street.

In the past the Weald was a densely forested and marshy area. During Saxon times, the Manor of Horley came under the control of the Benedictine Abbey of St Peter at Chertsey. In the Domesday Book of 1086, the Manor was within the hundred known as Cherchefelle which in 1199 became known as Reigate. The Manor passed to Henry VIII on the dissolution of the monasteries in 1539 and changed hands several times during the next sixty years.

About 1 mile (1.6 km) to the east is the overgrown but well-preserved site of Thunderfield Castle, a twelfth-century ring and bailey castle.

In 1602 it became the property of Christ's Hospital in London and the original map of the manor is now held at the Guildhall in the City of London. This shows that Horley consisted of three hamlets around a huge open common. One was around the area occupied by St Bartholomew's Church and the Six Bells public house; another by the River Mole and the third in Horley Row where some of Horley's oldest buildings can still be seen.

The Common was enclosed in 1816, new roads were laid and the intervening land was sold. In 1809 and later in 1816, two turnpikes were introduced to allow the operation of regular coach services from London to Brighton. The railway was laid in 1841 and a station was built in the town. From that position, and from that date, Horley grew at a slow rate until 1950. Since then its population has doubled as it became a dormitory town for London commuters. 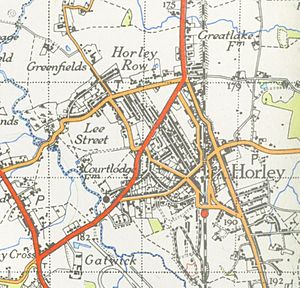 In 1908 the first scout patrol, the pewit patrol, was established. After gaining members this patrol formed 1st Horley scout group which them merged with 2nd Horley in 2006.

The Local Government Act of 1972 changed the boundary of Surrey and West Sussex and placed Horley, Gatwick and Charlwood in West Sussex. The removal of Gatwick Airport and the surrounding area from Surrey into West Sussex met some fierce local opposition with the result that the parishes of Horley and Charlwood were subsequently returned to Surrey in the eponymous Charlwood and Horley Act 1974, leaving the airport to stay in West Sussex.

The Horley Master Plan, which was approved by Reigate & Banstead Borough Council in February 2005, permits almost 2,600 new homes to be built. This prompted immediate controversy as the area as with most of non-metropolitan Surrey, i.e. since its reduction in 1974, is Metropolitan Green Belt however is permitted where in pursuance with the local plan, and meeting national criteria including demonstrating environmental sustainability and upholding the character of existing localities.

Horley is at an altitude of around 54 metres above mean sea level.

Salfords in the civil parish of Salfords and Sidlow, on the road to Redhill, is to the north and Gatwick Airport is between Horley and Crawley to the south. The village of Charlwood is to the west and Smallfield is to the east across the M23 Motorway.

Horley has been twinned with Vimy, France since 1991

Culture and the arts

Horley is home to the Archway Theatre. Located under the arches of the Victoria Road railway bridge, the theatre consists of a bar, auditorium, studio theatre and rehearsal rooms. The main auditorium seats 95 and the studio seats 40. The company presents 10 full productions each year as well as a number of studio events and youth productions. 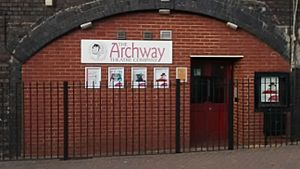 Horley is served by Metrobus bus routes connecting with Redhill, Three Bridges, Crawley, East Grinstead, Caterham and Gatwick Airport, as well as the outlying villages of Charlwood and Smallfield.

Horley railway station is served by Southern on the Brighton Main Line.

All content from Kiddle encyclopedia articles (including the article images and facts) can be freely used under Attribution-ShareAlike license, unless stated otherwise. Cite this article:
Horley Facts for Kids. Kiddle Encyclopedia.