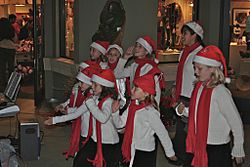 A Christmas carol (also called a noël, from the French word meaning "Christmas") is a carol (song or hymn) whose lyrics are on the theme of Christmas. They are traditionally sung on Christmas itself or during the surrounding holiday season. 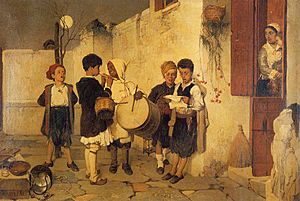 Carols were first sung thousands of years ago in Europe. They were sung by pagans at the celebration of the Winter solstice. Later, medieval carols were sung in elaborate formal rituals (such as the Catholic Mass). As they are known today, Christmas carols date back to about the 19th century. The tradition of going from house to house was not a part of Christmas caroling at first. It dates back further to Anglo-Saxon traditions. the word wassail comes from the Anglo-Saxon toast Wæs þu hæl, meaning "be in good health". Wassailing likely predates the Norman conquest in 1066. The wishing of good fortune to neighbors produced the song "Here We Come-A-Wassailing". Another song, "We Wish You a Merry Christmas", also comes from the Wassailing tradition. The two forms, singing and wassailing, came together during the Victorian era in England. They produced the modern custom of Christmas caroling.

In the 1680s and 1690s, two French composers added carols into their works. Louis-Claude Daquin wrote 12 noels for the organ. Marc-Antoine Charpentier wrote a few instrumental versions of noels, plus one major choral work "Messe de minuit pour Noël". Other examples include:

All content from Kiddle encyclopedia articles (including the article images and facts) can be freely used under Attribution-ShareAlike license, unless stated otherwise. Cite this article:
Christmas carol Facts for Kids. Kiddle Encyclopedia.