Christina Georgina Rossetti (5 December 1830 – 29 December 1894) was born in Charlotte Street (now 105 Hallam Street), in London and was an English Victorian poet who wrote a variety of romantic, devotional, and children's poems.

She is known for her poem "Goblin Market", the "Remember" and her sonnets. She also wrote the words of two Christmas carols well known in the British Isles: "In the Bleak Midwinter", later set to music by Gustav Holst and by Harold Darke, and "Love Came Down at Christmas", also set by Harold Darke and by other composers.

Her father Gabriele Rossetti was also a poet and a political exile from Vasto, Abruzzo, since 1824 and her mother Frances Polidori was the sister of Lord Byron's friend and physician, John William Polidori.

She had two brothers and a sister: Dante Gabriel became an influential artist and poet, and William Michael and Maria both became writers.

Christina was the youngest child in the family, she was a lively child and she dictated her first story to her mother before she had learned to write. 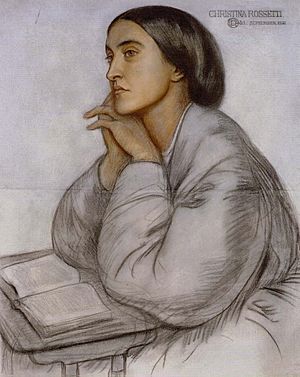 All content from Kiddle encyclopedia articles (including the article images and facts) can be freely used under Attribution-ShareAlike license, unless stated otherwise. Cite this article:
Christina Rossetti Facts for Kids. Kiddle Encyclopedia.