A ballad is a form of verse. It is often a story set to music. Ballads were popular in British and Irish poetry and music until the 19th century from the late medieval period. It was also used in Americas, Australia and North Africa. Many ballads were written and sold as single sheet broadsides. Poets and composers from the 18th century used this form. In this way, they produced lyrical ballads. In the later 19th century, ballads were slow form of popular love song. The term is now often used as synonymous with any love song, particularly the pop or rock power ballad. 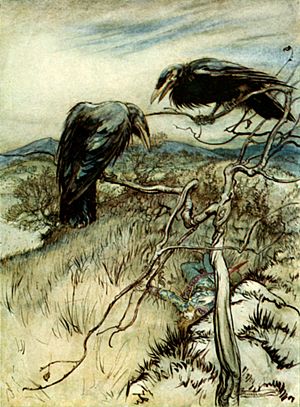 Illustration by Arthur Rackham of the ballad The Twa Corbies 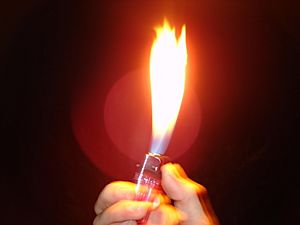 To emphasize the emotional aspect of a power ballad, crowds customarily hold up lit lighters.

Power ballad is a name given to love songs that were predictably included in heavy metal albums in the 1980s.

The power ballad was usually slower in tempo and much less aggressive in lyrics than the other music on the album. The songs were often made in a hope of scoring a Top Forty hit, and were particularly associated with bands in the hard metal genre. Examples include Poison's "Every Rose Has Its Thorn" and Bon Jovi's "Wanted Dead Or Alive".

All content from Kiddle encyclopedia articles (including the article images and facts) can be freely used under Attribution-ShareAlike license, unless stated otherwise. Cite this article:
Ballad Facts for Kids. Kiddle Encyclopedia.