Highgate is a suburban area of north London at the north-eastern corner of Hampstead Heath, 4.5 miles (7.2 km) north north-west of Charing Cross.

Highgate is one of the most expensive London suburbs in which to live. It has an active conservation body, the Highgate Society, to protect its character.

Until late Victorian times it was a distinct village outside London, sitting astride the main road to the north. The area retains many green expanses including the eastern part of Hampstead Heath, three ancient woods, Waterlow Park and the eastern-facing slopes known as Highgate bowl.

At its centre is Highgate village, a collection of largely Georgian shops, pubs, restaurants and residential streets, interspersed with diverse landmarks such as St Michael's Church and steeple, St. Joseph's Church and its green copper dome, Highgate School (1565), Jacksons Lane arts centre housed in a Grade II listed former church, the Gatehouse Inn dating from 1670 and Berthold Lubetkin's 1930s Highpoint buildings. Highgate also contains the Victorian cemetery in which the Communist philosopher Karl Marx is buried, and many other notable people.

The village is at the top of North Hill which provides views across London: it is 129 metres (423 ft) above sea level at its highest point. 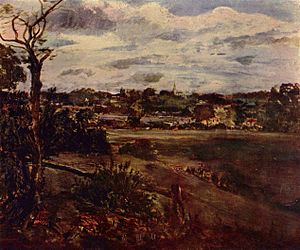 Historically, Highgate adjoined the Bishop of London's hunting estate. Highgate gets its name from these hunting grounds, as there was a high, deer-proof hedge surrounding the estate: 'the gate in the hedge'.

The bishop kept a toll-house where one of the main northward roads out of London entered his land. A number of pubs sprang up along the route, one of which, the Gatehouse, commemorates the toll-house.

In later centuries Highgate was associated with the highwayman Dick Turpin.

Hampstead Lane and Highgate Hill contain the red brick Victorian buildings of Highgate School and its adjacent Chapel of St Michael. The school has played a paramount role in the life of the village and has existed on its site since its founding was permitted by letters patent from Queen Elizabeth I in 1565.

The area north of the High Street and Hampstead Lane was part of Hornsey parish and also later the Municipal Borough of Hornsey and the seat of that borough's governing body for many years.

Highgate Hill, the steep street linking Archway (traditionally called part of Upper Holloway) and Highgate village, was the route of the first cable car to be built in Europe. It operated between 1884 and 1909.

Like much of London, Highgate suffered damage during World War II by German air raids. The local tube station was used as a bomb shelter. 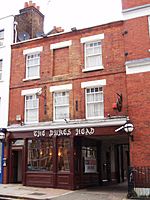 Highgate is known for its pubs which line the old high street and surrounding streets. Some notable favourites are the Angel, the Flask, the Duke's Head and the Wrestlers.

The name of the village is commonly however, the London Underground in announcements at Highgate tube station uses the alternative pronunciation of where the final syllable matches the last syllable in "frigate".

All content from Kiddle encyclopedia articles (including the article images and facts) can be freely used under Attribution-ShareAlike license, unless stated otherwise. Cite this article:
Highgate Facts for Kids. Kiddle Encyclopedia.