Archway is a district of the London Borough of Islington in inner north London, England. On the A1, it is centred on Vantage Point (formerly Archway Tower) and Archway tube station.

Archway is of medium elevation between Highgate above and Islington below and has seven small parks and two large parks. West of Archway is Whittington Hospital, beyond which is a larger area divided between Highgate Cemetery and Waterlow Park.

Ascociated with nearby 'The Hungry Hill', a notorious area of North London, near Archway, comprising Hazelville Road, Sunnyside Road, Hornsey Lane and the surrounding vicinity.

Hungry Hill, an area in N19, was an area that produced some of London's most feared criminals such as John Moriarty (no relation to the fictional one) who was a north London armed robber active in the 70s known as "the Target" because he had been shot so many times, or Frank Smith who was both feared and respected by other crime families in London.

The nickname of the area derived from the locals of the area as this was an area that was extremely poor and everyone was hungry.

According to the legend of Dick Whittington the bow bells could once be heard from as far away as the Highgate Archway (4.5 miles north). Many people assume that the Bow Bells are to be found in the district of Bow, rather than the lesser known St Mary-le-Bow church in Cheapside in the City of London. Thus while all East Enders are cockneys, not all cockneys are East Enders. 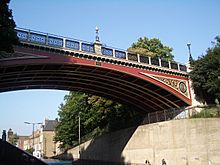 Hornsey Lane Bridge, an ornate road bridge is the origin of the name of the district 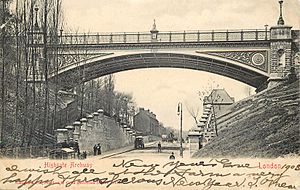 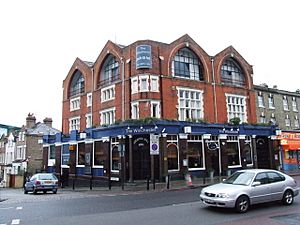 The name derives from the Archway bridge built in part of south Highgate for the minor road between south Highgate and Crouch End, Hornsey in 1896, the predecessor of Hornsey Lane Bridge.

A tunnel was attempted more than once for the Highgate bypass, to join the Great North Road by avoiding the steep Highgate Hill and narrow roads of Highgate village. However, these failed on collapsing. Instead, today's large cutting was recommended by John Rennie and a high, multi-arched road bridge across this. The first bridge of 1813 was designed by John Nash and demolished in 1901; its replacement, dates from 1897. The minor road over is Hornsey Lane.

Archway has come to designate the smaller than 0.4 square miles (1.0 km2) catchment of its underground station relative to all other stations. The official parishes and neighbourhoods within its definition are Highgate and Upper Holloway with a very small part of Islington. Upper Holloway has become in modern use generally restricted to the smaller catchment around its railway station and post office.

Seven Bus routes in London commence or end at 'Archway' and the term became mainstream across most social classes after its tube station abandoned its previous names of Highgate (until 1939) and subsequently Highgate (Archway) and Archway (Highgate).

In today's purely religious ecclesiastical parish system (once having had relief-for-the-poor vestries and highways churchwardens), the area is split between Whitehall Park, Upper Holloway and St John the Evangelist, Upper Holloway.

The Archway Road is part of the A1 or Great North Road, one of the original toll roads. From 1813–1864, Archway was the site of a toll gate, where travellers had to pay for the next stage of their journey. A plaque on the block of flats at 1 Pauntley Street commemorates the gate.

Highgate Hill, the road from Archway to Highgate village, was the route of the first motorised cable car in Europe operating between 1884 and 1909.

It was at Archway that Dick Whittington heard the Bow Bells ringing and returned to London. There is a statue on Highgate Hill to commemorate this (see below). Pauntley Street takes its name from the village of Pauntley in the Forest of Dean, Gloucestershire, traditionally regarded as Dick Whittington's birthplace.

For much of the 20th century, the area had a large Irish population. Although immigration from Ireland slowed as the country became more prosperous, the Irish influence on the area can still be seen in Irish pubs such as The Mother Red Cap and The Crown, and in the supply of most Irish newspapers in local newsagents.

The Whittington hospital on the south-west side of Highgate Hill has many buildings and specialisations, taking up a large minority of the west of the area, named after Richard Whittington.

Archway including its western green buffers has nine parks within a mile of the tube station (albeit only 5 in Archway): Archway Park, Hillrise Park, Dartmouth Park, Elthorne Park, Sunnyside Gardens, Crouch Hill Park, Waterlow Park, Whittington Park, Foxham Gardens, and Tufnell Park Playing Fields. The Parkland Walk is in the New Orleans Walk neighbourhood and half within Crouch End where defined by proximity to rail or tube station. Green spaces are contained between facing blocks of the residential mid rise estates: Girdlestone Walk, Henfield Close and Cardinals Way, varying proportions of which remain social housing.

Archway has a very short high street at its centre with a long southern continuation, Junction Road. A tall commercial and residential tower, Vantage Point, next to the tube station, forms the highest structure in Archway.

The Archway Tavern the central pub with weekly music concerts is where the photograph for the cover of The Kinks' 1971 album Muswell Hillbillies was taken. There is a small statue of Whittington's Cat outside the Whittington Stone pub.

The Winchester, a pub at 206 Archway Road, is on the Campaign for Real Ale's National Inventory of Historic Pub Interiors.(Note: It is not in Archway N19, Islington but in Highgate, N6, Haringey.) It was built in 1881 as the Winchester Tavern, and it later became the Winchester Hall Hotel. The name derives from Winchester Hall, a nearby late 17th-century mansion. 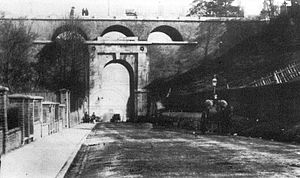 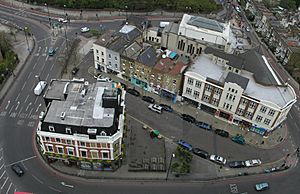 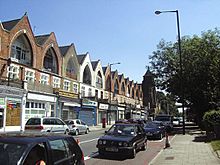 The nearest London Underground station is Archway tube station on the Northern line.

All content from Kiddle encyclopedia articles (including the article images and facts) can be freely used under Attribution-ShareAlike license, unless stated otherwise. Cite this article:
Archway, London Facts for Kids. Kiddle Encyclopedia.