Kids Encyclopedia Facts
Not to be confused with Marylebone or Bow Church. 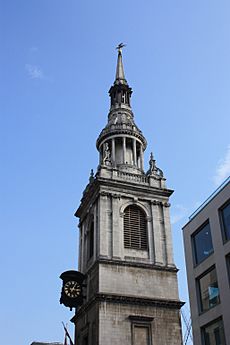 St Mary-le-Bow is an historic church rebuilt after the Great Fire of 1666 by Sir Christopher Wren in the City of London on the main east–west thoroughfare, Cheapside. According to tradition a true Cockney must be born within earshot of the sound of Bow Bells (which refers to this church's bells rather than St Mary and Holy Trinity, Bow Road, in Bow, an outlying village until the 19th century).

The sound of the bells of St Mary's is credited with having persuaded Dick Whittington to turn back from Highgate and remain in London to become Lord Mayor.

Details of the bells:

Weights in hundredweights, quarters and pounds.

The previous "great bell at Bow", the tenor bell of the peal installed in 1762 and destroyed in an air raid of 1941, weighed 58 hundredweight, with six tons of ironwork braces cut into the inside walls of the tower as reinforcement. Earlier still, the first great bell was a byword for having a sonorous tone as, in 1588, pamphleteer Robert Greene sarcastically likens the verse of Christopher Marlowe to the bell's "mouth-filling" resonance.

Ordinarily, distances by road from London are now measured from Charing Cross but, before the late 18th century, they were measured from the London Stone in Cannon Street, or the Standard in Cornhill. However, on the road from London to Lewes, the mileage is taken from the church door of St Mary-le-Bow. To note the reference used, mileposts along the way are marked with a cast-iron depiction of a bow and four bells. 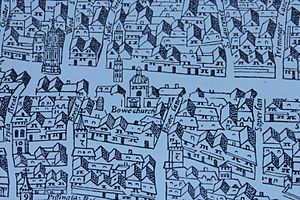 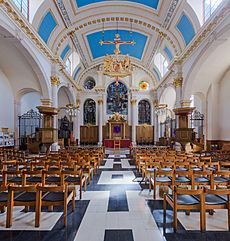 The interior, facing the altar

Archaeological evidence indicates that a church existed on this site in Saxon times. A medieval version of the church had been destroyed by the London Tornado of 1091, one of the earliest recorded (and one of the most violent) tornadoes in Britain, although the newly completed arched crypt survived. During the later Norman period the church, known as “St Mary de Arcubus”, was rebuilt and was famed for the arches (“bows”) of stone. At that period the 12 feet 6 inches (3.8 m) high vaulted crypt—although only accessible from within the church—had windows and buttresses visible from the street. However, the anecdotalist and historian John Stow dates the titular arches, made of Caen stone in the form of a crown steeple and supporting a lantern, to no earlier than 1515. This is the form of the steeple in the Agas woodcut of 1561 (right). This erroneous explanation for the source of the name gained some traction in the centuries to follow, including an endorsement by Palace of Westminster architect Augustus Pugin.

From at least the 13th century, the church was a peculier of the Diocese of Canterbury and the seat of the Court of Arches, to which it gave the name. The “bow bells”, which could be heard as far away as Hackney Marshes, were once used to order a curfew in the City of London. This building burned in the Great Fire of London of 1666. 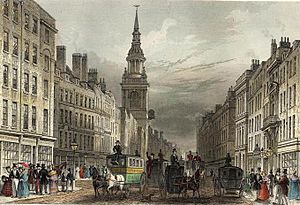 The church with its steeple had been a landmark of London. Considered the second most important church in the City of London after St Paul's Cathedral, St-Mary-le-Bow was one of the first churches to be rebuilt after the fire by Christopher Wren and his office. The current structure was built to the designs of Wren between 1671 and 1673; the 223-foot (68 m) steeple was completed in 1680. The mason-contractor was Thomas Cartwright, one of the leading London mason-contractors and carvers of his generation.

In 1914, a stone from the crypt of St Mary-le-Bow church was placed in Trinity Church, New York, in commemoration of the fact that King William III granted the vestry of Trinity Church the same privileges as St Mary-le-Bow vestry, the forerunner of lower-tier local government. Since the early 1940s, a recording of the Bow Bells made in 1926 has been used by the BBC World Service as an interval signal for the English-language broadcasts. It is still used today preceding some English-language broadcasts.

Much of the current building was destroyed by a German bomb during the Blitz on 10 May 1941, during which fire the bells crashed to the ground. Restoration under the direction of Laurence King began in 1956 (with internal fittings by Faith-Craft, part of the Society of the Faith). The bells as listed above, cast in 1956, were eventually installed to resume ringing in 1961. The church was formally reconsecrated in 1964, having achieved designation as a Grade I listed building on 4 January 1950.

In the church is a memorial to members of the Norwegian resistance who died in the Second World War, which is in two parts; a commemorative plaque and a relief of Saint George and the Dragon.

In the churchyard is a statue of Captain John Smith of Jamestown, founder of Virginia and former parishioner of the church.

Since 1989, there has been a restaurant in the crypt: Café Below. 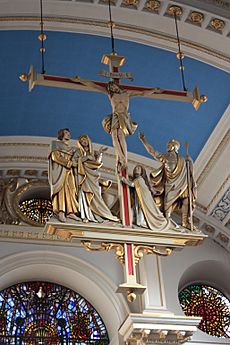 St Mary-le-Bow ministers to the financial industry and livery companies of the City of London. Consequently, services feature weekday morning and evening led prayers lasting just a quarter of an hour generally at 08:15 (except Tuesdays) and 17:45. There is a memorial in the church to the first Governor in Australia, Admiral Arthur Phillip, who was born in the parish. Through this connection the Rector of St Mary-le-Bow is the Chaplain of the Britain–Australia Society.

It is still home to the Court of Arches today. 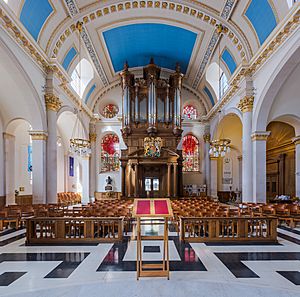 The organ is a two-manual and pedal design by Kenneth Tickell and Company, with design and construction initiated in 2004. It occupies the case of the previous Rushworth and Dreaper organ (from the 1960s). The inaugural recital was given by Thomas Trotter in September 2010. The resident organist is Alan Wilson.

All content from Kiddle encyclopedia articles (including the article images and facts) can be freely used under Attribution-ShareAlike license, unless stated otherwise. Cite this article:
St Mary-le-Bow Facts for Kids. Kiddle Encyclopedia.