Kids Encyclopedia Facts
This page is about the church in Bow, Tower Hamlets. For the City of London church with the famous bells, see St. Mary-le-Bow. For the station, see Bow Church DLR station.

Bow Church is the parish church of St Mary and Holy Trinity, Stratford, Bow. It is located on a central reservation site in Bow Road (part of the A11), in Bow, in the London Borough of Tower Hamlets. There has been a church on the same site for approximately 700 years. The church was bombed in the Second World War, and the bell tower was reconstructed just after the war.

The church (as a chapel of ease) was licensed by Bishop Ralph Baldock of London on 17 November 1311 for the people of Stratford-at-Bow within the parish of Stepney. Before this, local people were obliged to travel to St Dunstan's, Stepney, to attend church. This was a difficult journey - especially in winter - when the road was cut off by flooding. In the 14th century, they felt confident and wealthy enough to petition for their own place of worship. The chapel of ease allowed them to practise their religion locally, but they were still obliged to attend St Dunstan's at Stepney on religious holidays and to pay for its upkeep. In 1497, following a dispute about the terms of this arrangement, an agreement was then reached, whereby the people of Bow promised to acknowledge themselves as parishioners of Stepney and agreed to pay 24 shillings annually for repairs of the mother church, and to dispense with their attendance there, except on the feast of Saint Dunstan, and on the Wednesday in Whitsunweek, when they were to accompany the rest of the parishioners in procession to Saint Paul's Cathedral.

In 1556 at Bow, during the reign of Mary I of England, and under the authority of Edmund Bonner, Bishop of London, many people were brought by cart from Newgate and burned at the stake in front of Bow Church in one of the many swings of the English Reformation. These included the thirteen Stratford Martyrs.

In 1719, the parish became independent and St Mary, Stratford, Bow, was consecrated. The parish also included the Old Ford area which has also been known as North Bow.

In 1767, the church became the resting place of Colonel Philip Ludwell III, the earliest known convert to Eastern Orthodoxy in America. Although the church was Anglican, he was buried according to the funeral rites of the Orthodox Church. The last burial in the churchyard was in 1854, and it was re-ordered as a public garden by the Metropolitan Public Gardens Association in 1894, laid out by the MPGA's landscape gardener Fanny Wilkinson, who took advice from CR Ashbee of the Society for the Protection of Ancient Buildings as to which tombstones should be preserved. The eastern section of the churchyard was laid out as a garden by Wilkinson’s successor Madeline Agar in 1911. More recent input by the MPGA has been the provision of 1,500 spring bulbs.

The present building is thought to have a 14th-century structure, the tower was added in the 15th century. It is constructed of Kentish Ragstone with brick additions. Many of the windows are in the late perpendicular style. Inside the church, there are monuments including those to Grace Amcottes, died 1551; Alice Coborn, died 1689; and Prisca Coborn, died 1701. The south aisle was replaced in 1794. In 1896, the chancel roof collapsed, prompting a major restoration by the architect Osborn C Hills. The church suffered considerable bomb damage during the London Blitz. The site was visited by Queen Elizabeth in 1951 to mark the start of a campaign to restore the church, the work was overseen by the architect H S Goodhart-Rendel. The Gothic-style iron railings around the churchyard were reinstated in 1984. The church was given Grade B listed building designation on 19 July 1950. and is now Grade II*.

It gives its name to the nearby Bow Church DLR station. Just outside the churchyard is a statue by Albert Bruce Joy of the Liberal Prime Minister, William Ewart Gladstone, which was paid for by the wealthy match manufacturer, Theodore H Bryant of Bryant and May in 1882. 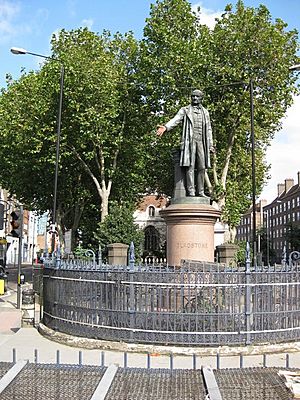 The Gladstone statue at Bow Church

The church is also used as the central image in the crest for the Bow masonic lodge, founded by the Rev Francis Mettrick, the then Rector of the church, in 1961.

The church is active today.

During 2011, the church celebrated 700 years of Christian life on the site.

On 1 May 2012, the Rev Debbie Frazer was instituted as the new Rector following the death of the Church's former Rector, Michael Peet. Peet had served the community for 22 years.

All content from Kiddle encyclopedia articles (including the article images and facts) can be freely used under Attribution-ShareAlike license, unless stated otherwise. Cite this article:
Bow Church Facts for Kids. Kiddle Encyclopedia.