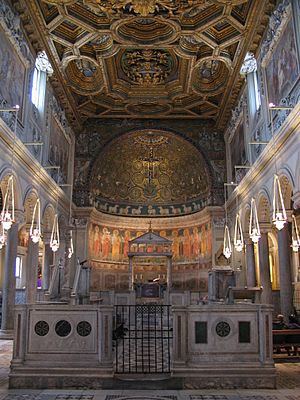 Interior of the Basilica of San Clemente in Rome, showing the chancel. 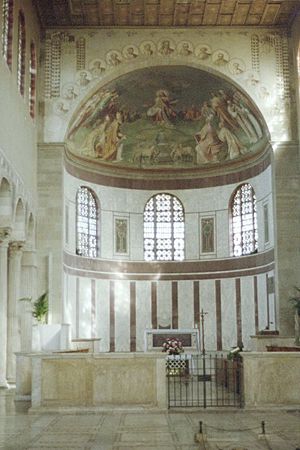 Chancel of the Basilica of Santa Sabina, also in Rome.

The chancel is a part of the architecture of many churches. It serves as a barrier between the part of the church accessible to lay people and the choir, which was reserved to the clergy. The rood screen has the same function, but a different layout. The Iconostasis is a kind of chancel which is richly decorated, and is used in Eastern Orthodox churches.

The chancel is where the congregation receives the blood and body of Jesus. The chancel is usually found in a Roman Catholic church. The bread and wine are changed to the body and blood of Jesus through transubstantiation. The Fourth Lateran Council of 1215 required clergy made sure that the area was inaccessible to the public. The main altar of the church is usually in the area behind the Chancel.

All content from Kiddle encyclopedia articles (including the article images and facts) can be freely used under Attribution-ShareAlike license, unless stated otherwise. Cite this article:
Chancel Facts for Kids. Kiddle Encyclopedia.