Old Ford is an area in the London Borough of Tower Hamlets that is named after the natural ford which provided a crossing of the River Lea.

Historically, Old Ford was a cluster of houses and a mill, around the location of the ford. It formed a part of the medieval parish of Stepney. It expanded rapidly in the Victorian era and was designated an independent Anglican parish in the mid-Victorian period, although civil administration has always been associated with Bow.

Old Ford, as the name suggests, was the ancient most downstream crossing point of the River Lea. This was part of a pre-Roman route that followed the modern Oxford Street, Old Street, through Bethnal Green to Old Ford and thence across a causeway through the marshes known as Wanstead Slip (actually in Leyton). The route then continued through Essex to Colchester. At this time the Lea was a wide fast flowing river and the tidal estuary stretched as far as Hackney Wick.

Colchester was where the Romans set up their initial capital for their occupation, and the road was upgraded to run from the area of London Bridge as one of the first paved Roman roads in Britain. Evidence has been found of a late Roman settlement at Old Ford dating from the 4th and 5th centuries. Excavations in 2002–3 discovered a substantial 'ribbon' development along the line of the road, surrounded by fields. Near the river there was evidence for a cluster of wooden buildings dominated by a large open-ended barn. Large amounts of cattle bone were also discovered, suggesting butchery to supply the London market. The Lea was thought to be used to supply Roman London with agricultural products and pottery from Hertsfordhire and the north. Old Ford was where the goods were transferred to continue their journey into London by wagon.

In 1110, Matilda, wife of Henry I, reputedly took a tumble at the ford on her way to Barking Abbey and ordered a distinctively bow-shaped three-arched bridge to be built over the River Lea. The building of the bridge at Bow didn't leave Old Ford as a backwater and the ford continued to be well used, but it was in an isolated and rural area and the local population centre moved to Bow in the middle ages. Old Ford was one of the sites of one of the many water mills in the area that supplied flour to the bakers of Stratforde-atte-Bow, and hence bread to the City. Due to their isolation residents were given dispensation to worship in the chapel of ease at Stratforde-atte-Bow, later Bow Church, to save the often difficult journey to the parish church of St Dunstan's at Stepney.

A lock and weir now exist on the Lee Navigation near where the ford used to be. This lies at the end of 'Hackney Cut', an 18th-century artificial channel and the natural channel (known as the Waterworks River) rejoins the channel below the lock. 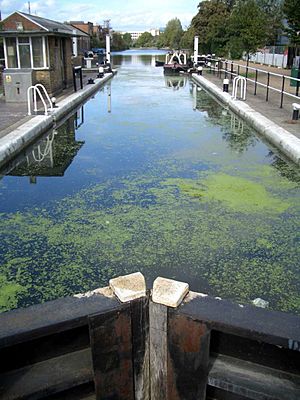 Farming and market gardening prevailed in the district until the 19th century when Old Ford became a part of the seamless East End conurbation, with large estates of relatively poor houses and much poverty. These were built to serve the new factories on the Lea and Lee Navigation and to serve the new railways.

The North London Railway had a line through the area with a station at Old Ford railway station. The line was badly damaged during World War II and never reopened. The station buildings were demolished in the early 1960s.

As of 2010 the Old Ford is again becoming desirable because of its streets of Victorian housing and improved transport links. New industry is moving in such as Forman and Field, a fish and game retailer and owner of a fish smokery based at neighbouring Fish Island. Following the London 2012 Olympics in nearby Stratford, there is a renewed interest in regeneration of the area.

Old Ford has no access to the London Underground network, but was formerly connected to the British rail network at Old Ford railway station on the North London Railway and at Coborn Road on the Great Eastern Main Line.

Old Ford is connected to the National Road Network via Parnell Road and Tredegar Road to the A12 (East Cross Route) running north/north east-south.

Access to the Hertford Union Canal is via the tow-path (which the National Cycle Route 1 also passes along) from Wick Road at St Marks Gate (Victoria Park). East leads to the Lee Navigation where proceeding north leads to Hackney Marshes. Turning south along the Lea leads through Bow Locks, into Bow Creek and thence to the River Thames, but the tow-path can often be blocked. West from Wick Road leads to the Hertford Union junction where the canal joins the Regent's Canal, near Mile End. There is a footbridge over the East Cross Route linking Fish Island.

For details of education in Old Ford, see List of schools in the London Borough of Tower Hamlets.

All content from Kiddle encyclopedia articles (including the article images and facts) can be freely used under Attribution-ShareAlike license, unless stated otherwise. Cite this article:
Old Ford Facts for Kids. Kiddle Encyclopedia.