Stepney is a district in the East End of London in the London Borough of Tower Hamlets. The district is no longer officially defined, and is usually used to refer to a relatively small area. However, for much of its history the place name applied to a much larger manor and parish. Stepney Green is a remnant of a larger area of Common Land formerly known as Mile End Green.

The area was built up rapidly in the 19th century, mainly to accommodate immigrant workers and displaced London poor, and developed a reputation for poverty, overcrowding, violence and political dissent. It was severely damaged during the Blitz, with over a third of housing totally destroyed; and then, in the 1960s, slum clearance and development replaced most residential streets with tower blocks and modern housing estates. Some Georgian architecture and Victorian era terraced housing survive in patches: for example Arbour Square, the eastern side of Stepney Green, and the streets around Matlock Street.

As with most of the East End of London, Stepney was sparsely populated marshland until the 19th century, when the development of London's docks and railways, combined with slum clearance, pushed the displaced poor and various immigrants looking for work into cheap housing being built in the area.

The first community developed around the church of St Dunstan's, which was founded in 923. Its name was recorded around 1000 AD as Stybbanhyð, "Stybba's landing-place". The Domesday Book survey of 1086 gives the name as Stibanhede and says that the land was held by the Bishop of London and was 32 hides large, mainly used for ploughing, meadows, woodland for 500 pigs, and 4 mills. There were over 100 serfs, split between villeins who ploughed the land, and cottars who assisted the villeins in return for a hut or cottage.

Bishop William held this land in demesne, in the manor of Stepney, on the day on which King Edward was alive and dead. In the same vill Ranulph Flambard holds 3½ hides of the bishop.

The Manor of Stepney was held by the Bishop of London in compensation for his duties in maintaining and garrisoning the Tower of London. Further ecclesiastic holdings came about from the need to enclose the marshes and create flood defences along the Thames. Edward VI passed the land to the Wentworth family, and thence to their descendants, the Earls of Cleveland. The ecclesiastic system of copyhold, whereby land was leased to tenants for terms as short as seven years, prevailed throughout the manor. This severely limited scope for improvement of the land and new building until the estate was broken up in the 19th century.

In the early 20th century, Stepney was one of the most Jewish neighbourhoods in England; it was eventually replaced by Stamford Hill.

The Siege of Sidney Street took place in Stepney in 1911.

Due to the availability of cheap housing, the East End of London and London Borough of Stepney has been home to various immigrants who have contributed to the culture and history of the area, such as the French Huguenots in the 17th century, the Irish in the 18th century, Ashkenazi Jews fleeing pogroms in Eastern Europe towards the end of the 19th century, and the Bangladeshi community settling in the East End from the 1960s onwards. The area still contains a range of immigrants, particularly young Asian families, as well as elderly East Enders, some students, and the beginnings of a young middle class. The 2011 UK Census revealed that 47% of the population was Bengali; the highest percentage of Bengalis in Southern England. White British people comprise just over a quarter of the ward of St. Dunstan's and Stepney Green.

The area is located in between Stepney, Bethnal Green, Whitechapel, Mile End and Globe Town

Stepney Green developed as a street of residential housing off the Mile End Road in the 15th century, and is now a conservation area. A brewery was founded in 1738 that developed into Charrington and Co. in 1897. The brewery building, the Anchor Brewery, was on the north side of Mile End Road, opposite Stepney Green; and is now the site of the Anchor Retail Unit, owned by Henderson Global Investors, though the Brewery Offices still remain on the corner of Mile End Road and Cephas Avenue.

St Dunstan's, founded in 923, is Stepney's oldest church. The present building dates principally from the 15th century. St Dunstan's has a long association with the sea, being responsible for registration of British maritime births, marriages and deaths until the 19th century. Malplaquet House is a Grade II listed building.

Stepney City Farm has been a feature in Stepney since opening as Stepping Stones Farm in 1979. A community resource, the farm aims to provide the people of East London a chance to experience rural life and engage in educational, environmental and creative projects. Stepney City farm is home to donkeys, cows, goats, pigs, sheep, ducks, geese, chickens, rabbits, ferrets and guinea pigs. As a working farm, eggs and vegetables are regularly sold. 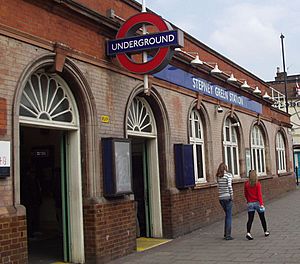 In the southern part of the district, the nearest Docklands Light Railway station is Limehouse. The station is also served by c2c, from Fenchurch Street station. It was formerly known as Stepney East.

The Stepney Historical Trust was set up in 1989 to advance the public's education in the history of Stepney and the surrounding areas. It is based in the London Dockers Athletic and Social Club and has installed a series of plaques on sites of historic interest.

For more details, see List of schools in the London Borough of Tower Hamlets

Stepney All Saints School is a Church of England voluntary aided school that was opened in 1710 by Sir John Cass as the Sir John Cass School. It merged with the Redcoat Secondary School in 1966 and took the name of Sir John Cass's Foundation and Red Coat School that year. It took its current name in 2020.

Stepney Green Maths, Computing and Science College is a community school for boys, the curriculum is broad, there is a wide range of extra-curricular activities offered before, during and after school.

The district's Senrab Street gave its name to Senrab F.C., a youth team now based in Wanstead Flats and notable for producing many future professional players.

The English physician Richard Mead, responsible for advances in understanding transmissible diseases, was born in Stepney.

Clergymen John Sentamu, formerly Bishop of Stepney, and Father Richard Wilson, founder of the Hoppers' Hospitals at Five Oak Green, Kent, lived in the borough at one time.

Musicians Monty Norman (composer of the James Bond theme) and Lionel Bart (known for creating the book, music and lyrics to the production Oliver!), were also born in Stepney, as was musician Wiley, widely considered to be the founding father of grime music.

British communist Alf Salisbury, who smuggled monetary funds to German anti-fascists during Hitler's rise to power, and fought in both the Battle of Cable Street and for the International Brigades during the Spanish Civil War, was born in Stepney. Later in life he led a successful campaign to convince the BBC and other British news outlets to stop using the term "Mongols" to refer to people with Down Syndrome. For this work he was awarded with special commondations from the Mongolian embassy.

All content from Kiddle encyclopedia articles (including the article images and facts) can be freely used under Attribution-ShareAlike license, unless stated otherwise. Cite this article:
Stepney Facts for Kids. Kiddle Encyclopedia.