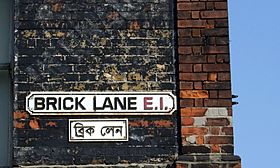 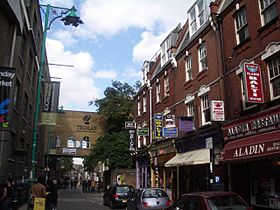 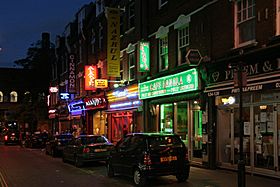 Brick Lane is a street in the London Borough of Tower Hamlets, in the East End of London. It is part of an old area which includes Bethnal Green, Whitechapel, Spitalfields and Petticoat Lane.

Today, it is the heart of the city's British Bangladeshi community and is known to some as Banglatown. It is famous for its many curry houses. It has a most interesting history.

Brick Lane gets its name from former brick and tile manufacture, using the local brick earth deposits, that began in the 15th century.

Successive waves of immigration began with Huguenot refugees spreading from Spitalfields, where the master weavers were based, in the 17th century. This started a connection with clothing which lasted for over three centuries.

The Huguenots were followed by Irish, Ashkenazi Jews and, in the last century, Bangladeshis. The area became a centre for weaving, tailoring and the clothing industry, due to the abundance of semi- and unskilled immigrant labour.

Brewing came to Brick Lane before 1680, with water drawn from deep wells. One brewer was Joseph Truman, first recorded in 1683. His family went on to establish the sizable Black Eagle Brewery on Brick Lane.

The Brick Lane Market was developed in the 17th century for fruit and vegetables. The Sunday market, like the ones on Petticoat Lane and nearby Columbia Road, dates from a dispensation given to the Jewish community. The Brick Lane Farmers' Market opened 6th June 2010.

In 1742, La Neuve Eglise, a Huguenot chapel, was built on the corner of Brick Lane and Fournier Street. By 1809, it had become The Jews’ Chapel, for promoting Christianity to the expanding Jewish population, and became a Methodist Chapel in 1819 (John Wesley having preached his first covenant sermon at the nearby Black Eagle Street Chapel). In 1898, the building was consecrated as the Machzikei HaDath, or Spitalfields Great Synagogue. In 1976, it became the London Jamme Masjid (Great London), to serve the expanding British Bangladeshi community. The building is Grade II* listed. Many Bangladeshi immigrants to Brick Lane were from the Greater Sylhet region. These settlers helped shape Bangladeshi migration to Britain; families from Jagannathpur and Bishwanath tend to dominate in the Brick Lane area today.

All content from Kiddle encyclopedia articles (including the article images and facts) can be freely used under Attribution-ShareAlike license, unless stated otherwise. Cite this article:
Brick Lane Facts for Kids. Kiddle Encyclopedia.